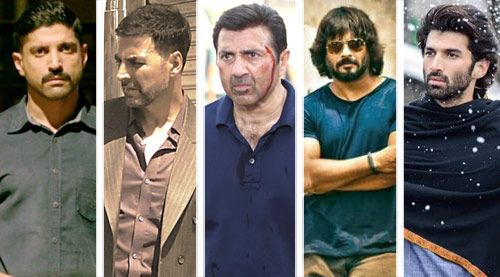 1. Wazir: Amitabh Bachchan and Farhan Akhtar together for the first time in Bejoy Nambiar's taut thriller. Slick action and the duo's terrific chemistry should

keep us glued. Release date Jan 8.Not to be missed.


2. Airlift: Akshay Kumar's 'Baby' for 2016. That realistic gritty action-oriented space the actor loves to occupy. He is back to recreate real-life events in Kuwait in 1990when


3. Ghayal Once Again: 25 years after Raj Kumar Santoshi's hit Ghayal Sunny Deol returns with the sequel. That's a long time to be gone. But the first film is not forgotten.


4. Saala Khadoos: Madhavan beefs up to play an out-of-luck boxer in this gritty sports film directed by Sudha Kongara. Rare to have a woman direct a sports film, that too one in

in the backdrop. Can't get better. Releasing 12 February.


6. Neerja: Sonam Kapoor plays the brave heart airhostess Neerja Bhanot who saved hundreds of lives in 1986 during a terror attack on board a Panam flight. Shabana Azmi plays Sonam's


7. Aligarh: Hansal Mehta's real-life story of the professor who was hounded and apparently killed for being gay. Manoj Bajpai plays the most difficult role of his career. Released 29


9. Rocky Handsome: Director Nishikant Kamat's gritty actioner adapted from the Korean film The Man From Nowhere features John as a man on a vendetta mission. Sure shot

10. Ki And Ka: Trust R Balki to come up with intriguing titles and even more intriguing star pairs. Cheeni Kam had Amitabh-Tabu. This one has Arjun Kapoor-Kareena. Truly a

treat to look forward to. Releasing on April 1.

12. Baaghi: Brace yourself. Tiger Shroff's second film, again with director Sabir Khan will have stunts of unprecedented proportions. This time Tiger has Shradha Kapoor for company.


15. Housefull 3: The Housefull franchise, this time directed by brothers Sajid-Farhad. Akshay Kumar and Riteish Deshmukh from the original film remain. Rest of the cast is


19. Sultan: Salman Khan's Eid release. Need anything more be said? Release date yet to be decided.


20. Mohenjo Daro: Ashutosh Gowariker-Hrithik Roshan together again after Jodha-Akbar for another historical-period film. Ambitious and with A R Rahman's music to bolster the

director's ambitions, this has to be a landmark. Releasing 12 August.


21. Rustom: Akshay Kumar's third release in 2016 produced by Neeraj Pandey and directed by first-timer Tinu Suresh Desai will give Hrithik and Mohenjo Daro competition on 12


22. A Flying Jatt: Tiger Shroff as a turbaned super-hero in a film directed by Remo D'Souza? This we've got to see. Releasing in August (date not decided).