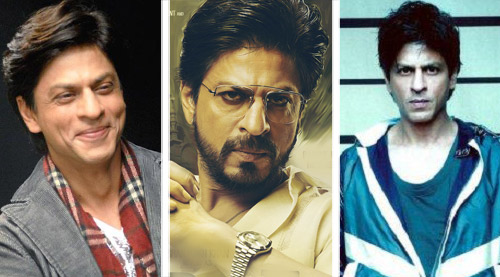 It's time to say goodbye to Raj and Rahul. In 2016 we'll see a complete makeover of Shah Rukh Khan as an artiste. Not that playing Raj, Rahul and the other conventional lover-boy roles has been easy for India's most enduring Bollywood superstar since Amitabh Bachchan. But it is time to move on, and move back to his roots.

As Shah Rukh has said on more than one occasion, it's not as though he has filmmakers breaking down his door with image-breaking roles while he shooes all of them away.

Let's not forget, Shah Rukh started his fabulous innings in Bollywood with the likes of Mani Kaul (Idiot) and Ketan Mehta (Maya Memsaab) before he shifted gears to become the iconic Raj-Rahul the lover-boy whose dimples spoke far louder than his words.

During his 23-year reign as a superstar the enduring image of the ageless lover-boy was occasionally interrupted by splutters of splendid performances in Ashutosh Gowariker's Swades, Shimit Amin's Chak De, Aditya Chopra's Rab Ne Banadi Jodi (Shah Rukh's most underrated performance to date), Sanjay Leela Bhansali's Devdas and Karan Johar's My Name Is Khan where Shah Rukh's Raj-Rahul persona disappeared completely into the autistic character in search of his Islamic identity, and of Obama.

But it's the iconic lover-boy roles that have endured in public memory, and rightly so. From the time he did Aditya Chopra's Dilwale Dulhaniya Le Jayenge, Shah Rukh's image of the dependable son-in-law that any father would want to be his daughter's husband, has been supremely ensconced in the public mind .The image of the bratty but upright lover-boy who is at once a child and a man refuses to be dispossessed in his audiences' mind.

But now it seems Shah Rukh has resolutely decided to move on. Both his films in 2016 take him away from the Peter Pan image to project him as character he has never played before. In Maneesh Sharma's Fan which releases on April 15 Shah Rukh plays his own fan. No, it's not a megalomanical role. He is cast in two roles as Shah Rukh the star, and Shah Rukh the fan who is so consumed by his adoration of his idol that he forgets to live his own life.

Delving into the complex star-fan relationship it's one of Shah Rukh's most layered roles in recent times. He doesn't play the fan as just a mirror-image of the star. Rather, prosthetics have been employed, for the first time in the superstar's career, to make the fan (who ironically dotes on the superstar's Raj-Rahul image even as the superstar moves away from that image in this film) look distinctly dissimilar and yet somehow affiliated to his idol.

Fan will be a leap of faith for Shah Rukh Khan, and one that he will achieve as effortlessly as he always does when given a chance to escape his lover-boy's image.
In fact 2016 will see Shah Rukh make that leap twice over. On July 3, Shah Rukh's second unorthodox film will release. Rahul Dholakia who once gave us Parzania that hard-hitting film on the Gujarat communal riots after the Godhra incident returns to his home territory with Raees which looks at the life of a real-life hooch don in prohibition-ridden Gujarat.

It's the most challenging role of Shah Rukh career where he changes not only his persona but also his non-political ideology by playing a character whose political leanings emerge willy nilly from the nature of his job. In an interview to me some years ago Shah Rukh had said, "I think cinema is a very important medium of putting social messages across. I want the message in my film to be more fun oriented. I started with street theatre. And we used to put across ideas on family planning or dowry with a lot of enjoyment. I love nautanki, folk theatre, cartoons and puppetry. These are vibrant forms of artistic expression. I love to express myself through basic art forms."

Commenting on his proclivity to move away from his image Shah Rukh had said to me, "In this matter I believe in what Mr Amitabh Bachchan does. I don't tell filmmakers what to make with me. I didn't write Swades. I can't tell writers to write a film keeping in mind whether 22 people or 22 million people liked it. I just do what they ask me to. I like to sell a dream. I like to tell stories. I'm a very good storyteller. I can convert the most boring topic into a riveting tale. I tell stories to my children every night. Some stories they don't like, so I avoid them. Others they like and I repeat them with variations. I can't keep repeating the same story the same way just because it works once. Filmmakers also need to understand that."

Fan and Raees in 2016 will show the evolution of the star from a fun-giving star to an actor who believes he has a social responsibility. And he is well up to it.