Amitabh Bachchan and Rishi Kapoor are all set to go the big screen together after 27 years in 102 Not Out. The film, helmed by Umesh Shukla, will be their first film after Shashi Kapoor's directorial Ajooba. There was a special screening held earlier this week which was attended by their sons, Abhishek Bachchan and Ranbir Kapoor. They recreated a photograph to their fathers which is absolutely cute. 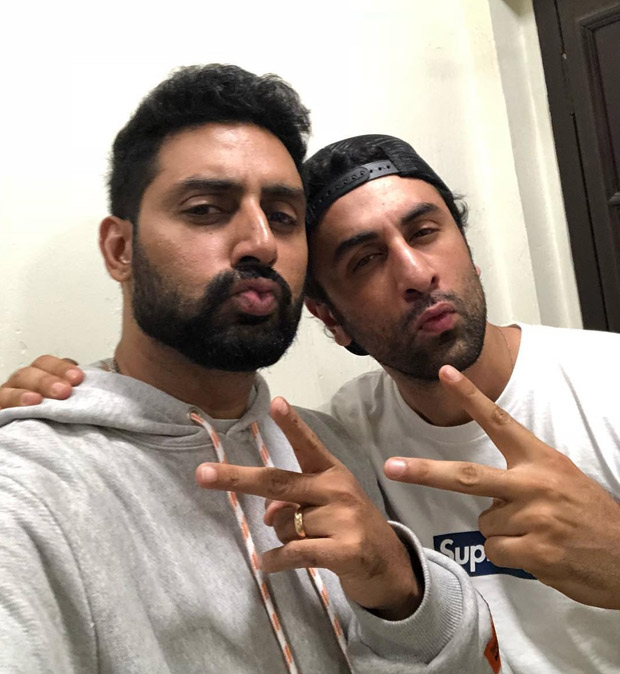 Last week, in a promotional video, Rishi Kapoor and Amitabh Bachchan were seen learning the art of pout selfie. While Amitabh was quick to learn it, Rishi took some time to figure out. The same photograph was recreated by their sons Abhishek Bachchan and Ranbir Kapoor. They met each at the special screening of the film. Abhishek shared the photo and wrote, "Yo! ! What they (the fathers) can do, we (the sons) try to do too. #102notout #fathersandsons #ootd @amitabhbachchan @chintskap#ranbirkapoor #mustwatch #pout."

The hit jodi of Amitabh Bachchan and Rishi Kapoor has worked in several iconic films including Amar Akbar Anthony, Kabhie Kabhie, Ajooba, Naseeb and Coolie. The two veteran actors are known to be the stalwarts of Hindi cinema. A Sony Pictures Releasing International Production and worldwide distribution- 102 Not Out is Produced by SPE Films India, Treetop Entertainment and Umesh Shukla’s Benchmark Pictures. The film releases worldwide on May 4, 2018.