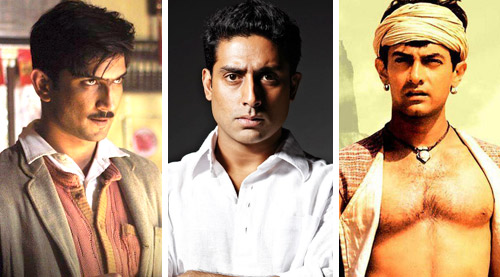 Sushant Singh Rajput has discovered a new love in his life. And girlfriend Ankita needn't feel threatened. Sushant has fallen in love with the Dhoti. He wonders why the national costume is not as favoured by Indian male celebrities as the saree is favoured by women in the limelight. Before Sushant other major Bollywood stars have also embraced the Dhoti.

1. Dilip Kumar in Ganga Jumna/Devdas/Naya Daur: The maestro of method acting wore the national costume with such casual pride it seemed he was born in one. After watching the Thespian woo Vyjanthimala in a dhoti in all three films hordes of youth in the 1950s and 60s switched to the loincloth as a formal dress code to college. Swadesi became cool.

2. Dharmendra in Anupama/Satyakam: He serenaded Sharmila Tagore in both the films wearing the Dhoti with such suave sophistication that she, the dimpled diva, simply fell for his charms. Dharmendra loves to wear the dhoti even in real life, though not to public functions.

3. Amitabh Bachchan in Anand: As the stern no-nonsense brooding Dr Bhaskar, the Big B donned the dhoti and looked every inch the Babu Mashai that he played.

4. Rajesh Khanna in Amar Prem/Safar: What is about Sharmila Tagore that brings the dhoti side out of her co-stars? It can be said with confidence that no Bollywood actor carried off the Dhoti with as much aplomb as Kakaji, a.k.a Rajesh Khanna. As the Bhadra Lok Anand Babu in Amar Prem who ends up frequenting a brothel to meet the only woman who offers him solace Rajesh Khanna insisted on wearing the dhoti right through the film.It's hard to imagine any other actor looking so poised in the dhoti singing 'Yeh Kya Hua Kaise Hua' without tripping over the baggy apparel.

5. John Abraham in Water: Who would believe that John had never worn a dhoti before Deepa Mehta taught him how to look comfortable in one playing a 19th century reformist? John is unlikely to wear the Dhoti in his future films. Aisa roles kahan?

6. Shah Rukh Khan in Devdas: Whenever Sanjay Leela Bhansali shot his close-ups Khan would slip off the dhoti and shoot in his jeans. Apparently he wasn't too comfortable wearing one. But he carried it off effectively.

7. Salman Khan in Bandhan: One doesn't know how he managed it. But manage he did to wear a dhoti in one of his rare roles as rustic character. Playing his sister Ashwini Bhave's protector Salman rocked it in the Gandhian togs.

8. Aamir Khan in Lagaan: Who would have ever thought this extremely urban actor would pull of the extremely rustic role, pull on the dhoti and walk home with all the awards?

9. Abhishek Bachchan in Khelein Hum Jee Jaan Se: Everyone told Junior he looked like his father in Hrishikesh Mukherjee's Anand. But Gowariker's historical where Abhishek played a real-life freedom fighter flopped miserably. He never returned to the dhoti.

10. Sushant Singh Rajput in Detective Byomkesh Bakshy: Playing the 19th century Kolkata detective Sushant not only wears the dhoti he even performs some really intricate stunts in it. Way to go.