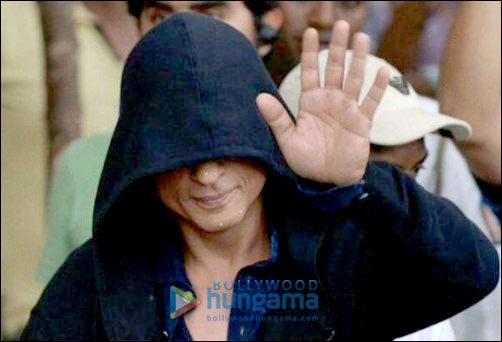 It's not surprising to see the shutterbugs following Shah Rukh Khan wherein they capture his daily routine on a regular basis. As of now, it is his film Fan that seems to be the point of focus. The film has already created curiousity with the actor playing a double role along with the glimpses of the shoot at exotic and iconic locations and now, the crew of Fan is currently shooting in Mumbai.


If the pictures are anything to go by, then the crew of this Yash Raj film is shooting at a crowded chawl in Mumbai. When the superstar arrived along with his team, he was spotted wearing a hoodie in order to avoid too much attention.

Later, Shah Rukh Khan went on to finish his make-up for the role and was spotted atop the chawl, all set for the shoot.
Prior to this, the team of Fan has completed a shoot schedule in Europe and shot in famous locations like Madame Tussauds in London and amidst picturesque locales of Croatia.