India has its own range of superhero comics since a long time. But unlike the West which is minting huge amount of money by making films on Marvel and DC comic characters, our filmmakers have lagged behind in this aspect. Bollywood has given a handful of superhero flicks like MR X [2015], DRONA [2008], A FLYING JATT [2016], RA.ONE [2011], ZOKKOMON [2011] etc. which didn’t work at the box office. KRRISH series is the only one that has been successful. Now this week’s release BHAVESH JOSHI SUPERHERO gets added to the list of ‘Hindi superhero films’. So does it manage to entertain and give audiences a great time? Or does it fail just like most of the superhero films of our industry? Let’s analyse 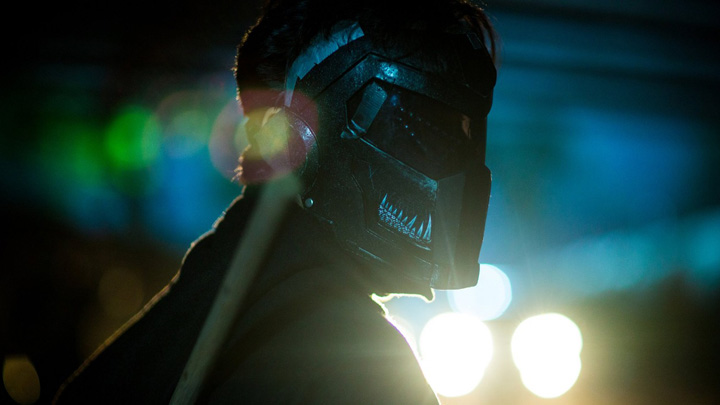 BHAVESH JOSHI SUPERHERO is the story of a one man’s fight against a corrupt practice in Mumbai. Siku (Harshvardhan Kapoor) is friends with Bhavesh Joshi (Priyanshu Painyuli) and Rajat (Ashish Verma). Siku and Bhavesh feel a change is needed in the country. Both participate in India Against Corruption (IAC) movement of 2011 and also start a YouTube channel called 'Insaaf TV'. As part of this endeavour, they’d wear masks in order to conceal their identity and expose those breaking local civic laws. When the IAC movement fizzles out by 2011 end, Siku gets disillusioned and moves on with his life. 6 years later, Siku is working as a coder in an MNC and he’s offered a chance to move to USA, which he accepts. Bhavesh meanwhile still believes in bringing change. An old aged resident contacts him and informs him of a huge racket involving water scarcity. Bhavesh uploads a video exposing the scam and the baddies involved in this racket are alarmed. They begin to find out his identity. Meanwhile an altercation takes place between Siku and Bhavesh and the former shoots a video of the latter wherein he’s speaking about the ills plaguing the country. Siku uploads the video online but only a part of it. Bhavesh is hence presented as someone who’s insulting India. The water scarcity baddies, headed by Rana (Nishikant Kamat), accuse Bhavesh of being an anti-national. He’s badly beaten up. Bhavesh however doesn’t relent and he continues exposing the racket. This time Rana's goons murder him. Siku reaches the airport to leave for USA but at the eleventh hour, he changes his mind. He returns back to the city without informing anyone and decides to avenge Bhavesh's death. He assumes the identity of Bhavesh Joshi and promises to teach the wrongdoers a tough lesson. What happens next forms the rest of the film.

BHAVESH JOSHI SUPERHERO's beginning portion is very dry and incoherent and makes no impact. It’s only when Bhavesh chances upon the water scarcity bit that the film gets better. The manner in which Bhavesh is tortured by Rana’s men is intriguing. The intermission point is when the film goes on a high. It is the best part of the movie and one expects fireworks in the second half. Sadly that never happens. The unconvincing moments are aplenty. It is bewildering how Siku and Sneha (Shreiyah Sabharwal) don’t communicate at all after the former pretends to move to USA, especially when they haven’t formally broken up. Moreover, Siku following Rana’s men without even changing his appearance is too much since they could have easily spotted him and his game would have been up. One expects at least the climax to be satisfying. But alas, the film gets worse at this point.

Vikramaditya Motwane’s direction is poor and this is shocking since he has handled his previous films [UDAAN, LOOTERA, TRAPPED] very well. A few scenes are deftly handled. For instance, the entire passport track is very relatable. But in the major part of the film, the direction goes haywire.

Harshvardhan Kapoor is strictly okay and lacks the conviction needed for the part. At some places, he’s completely blank. For instance, after Bhavesh gets beaten up because of his folly, he ideally should have looked regretful and sad. But these emotions don’t come across on his face at all. Priyanshu Painyuli is much better and dominates the first half. His dialogue delivery especially is praiseworthy. Nishikant Kamat leaves a mark in a small role. Shreiyah Sabharwal is wasted. Ashish Verma is great and shines in the finale. The actors playing Hemant Patil, old aged resident and the cop do a nice job.

Amit Trivedi’s music is nothing great. ‘Chavanprash’ is foot tapping but Arjun Kapoor’s version is missing. ‘Hum Hain Insaaf’ stands out and ‘Qasam Kha Li' is relegated to the background. Amit Trivedi’s background score is dramatic.

On the whole, BHAVESH JOSHI SUPERHERO is a poor show owing to its haphazard writing and bad direction. At the box office, it will be a disaster. Avoid!

Will Harshvardhan Kapoor be the unlikely (super) hero this winning season with Bhavesh Joshi Superhero?

Published on May 28, 2018 11:38 AM IST
Bollywood Hungama News Network https://www.bollywoodhungama.com/

Bhavesh Joshi vs. Veere Di Wedding: Anil Kapoor is very anxious about the clash between Harshvardhan Kapoor and Sonam Kapoor