Last Updated 19.05.2022 | 11:53 PM IST
feedback language
follow us on
Bollywood Hungama » News » South Cinema » When Taapsee Pannu got heavily bruised for her next film Game Over

If you think Taapsee Pannu has unconventional choices when it comes to only Bollywood, then you are highly mistaken. The actress has also been making experimental choices when it comes to South cinema and the latest example of it is the psychological thriller Game Over. The film revolves around the life of a video gamer played by Taapsee who is grappling with internal and external threats! The film will also see her wheel-chair bound and besides having plastered legs, it seems that the actress also had bruised hands all over! 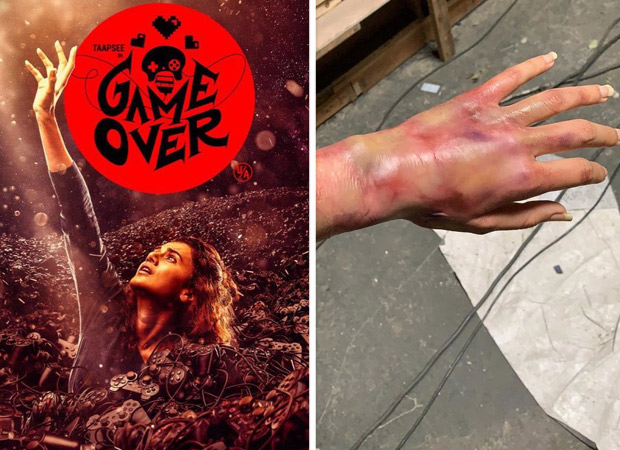 Currently, while Taapsee Pannu is in the midst of Game Over promotions, she took to social media to share this collage of her injuries. Let us tell you that they aren’t real injuries but actually prosthetics used for her character in the film. Here’s a look at the same:

Yes yes, chiffon sarees in snow capped mountains for 25 days would’ve been tougher... so I chose all this ????????♀️ #GameOver #ActorsLife

For the uninitiated, Game Over talks about ‘anniversary reaction’ wherein one fears to relive the trauma and the incident that happened around the specific period of time, years ago. While Game Over was supposed to release in Telugu and Tamil, Anurag Kashyap came on board for his favourite actress Taapsee and decided to present the Hindi dubbed version of the film. The film is expected to hit theatres next week, on June 14, 2019.

Also Read: EXCLUSIVE: Taapsee Pannu reveals she NEVER wanted to be an actress!

Tamannaah Bhatia says it's an honour to be a…

Chandrika Ravi on board for a special song…