Just a day ago, we had announced the winners list of 67th Filmfare Awards where the Suriya starrer Soorarai Pottru swept away maximum awards in the Tamil category. The actor also received the award for Best Actor and during his speech, he mentioned about his iconic special appearance in this year’s release Vikram. The Kamal Haasan starrer action feast turned to be a blockbuster not only in the South box office but across quarters and the film received massive appreciation from the industry insiders too. The film, that also stars Vijay Sethupathi and Fahadh Faasil, had Suriya in the role of the ‘drug lord’ Rolex. Speaking about it at the recent Filmfare Awards, he said that he had initially considered rejecting it. 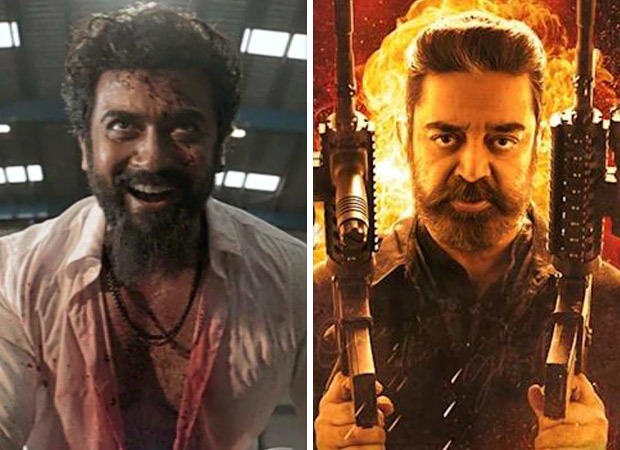 A video of Suriya talking about Rolex in the film Vikram and how he had initially decided to not do the film found its way on social media. However, the South superstar went on to confess that he did it only for one man and it is Kamal Haasan. At the recently held 67th Filmfare Awards South, Suriya said, “Whatever I’m today, no matter what I’m doing in life, Kamal sir would’ve always been my inspiration. When he called and said there’s an opportunity, I didn’t want to let go of it. I want to share this with everyone. Whenever you’re scared, that’s when you want to jump. It was a last minute decision. I was going to call and tell Lokesh, I won’t do it. But I did it for one man. I did not expect to receive so much love and appreciation for the character.” His brief appearance in the film also made fans of the superstar wonder if a film on Rolex is on the pipeline too.

Speaking of Vikram, the film is directed by Lokesh Kanagaraj and it is expected to be a part of the LCU aka Lokesh Cinematic Universe. The LCU kicked off with the Karthi starrer Kaithi and if reports are to be believed, the next film in the LCU world will feature Thalapathy Vijay.

Also Read: A R Murugadoss to return to direction with Suriya starrer Ghajini 2?