Allu Arjun and Rashmika Mandanna starrer Pushpa: The Rise has taken over globally with the film now gearing up for the release in Russia. The actors too have taken off to the country to kick off the promotions and they couldn’t get over the kind of stardom and fans they enjoy in the country. From fans paying special tribute for them on social media to them attending press meets and conferences, the promotions are on full swing. And during one such public appearance, the team did something special for their Russian fans. 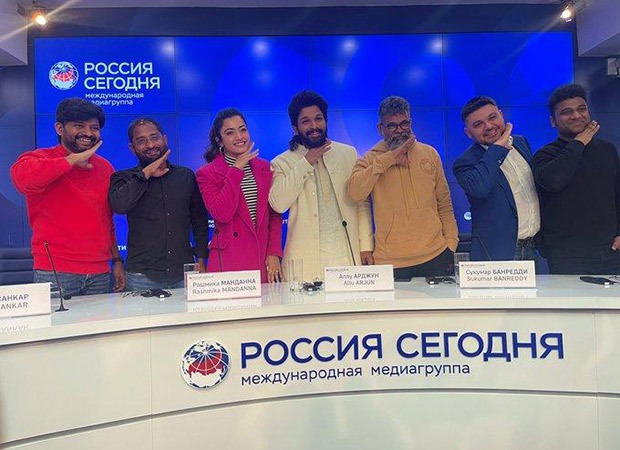 Allu Arjun, Rashmika Mandanna, and the rest of the team of Pushpa: The Rise attended a press conference where they answered several questions about the film. During the same, the actor and the team of them recreated the iconic ‘Thaggede Le’ gesture. Readers may recall that the hand gesture gained such immense fame that it was even recreated for ‘Pushpa’ Ganesha idols. It seems that there is massive fan following for the Telugu film in Russia and they were thrilled to see their stars doing it for them. Sharing a photo of the same on his official Twitter page, Arjun said, “Pushpa in Russia.”

Another example of the massive fandom of Pushpa: The Rise in Russia was when the fans paid a tribute of the song ‘Saami Saami’ from the film. While it originally featured Rashmika Mandanna, a video featuring fans from Russia vibing to its beats found its way on social media.Taking to Instagram, a Russian fan shared a video of an adorable Russian family dancing to ‘Saami Saami’. In the caption, they wrote “Sofia's best emotions on #saamisaami ???? Dancing with my girls”

Pushpa: The Rise is all set to release in the Russian market on December 8.