Finally after COVID, the magnum opus directed by Mani Ratnam will finally hit the silver screens next week. Set against the backdrop of the 10th century, Ponniyin Selvan features the rule of Chola Empire, with an ensemble cast leading the film. PS-1 teaser gives us a glimpse of the massive mounted sets, lavish battlefield scenes, and of course a cast that is a pleasure to watch for! Chiyaan Vikram, Aishwarya Rai Bachchan, Trisha, Jayam Ravi, Karthi amongst others will be seen at the forefront along with a powerful supporting cast. 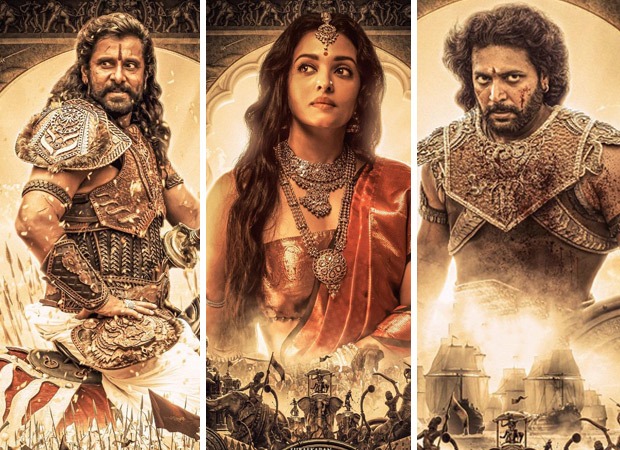 While the first look of Vikram and the rest of the cast were released earlier this week, along with Jayam Ravi as Raja Raja Chola today, the teaser gives us a glimpse of the avatars of the supporting cast. Parthiban, Jayaram, Prakash Raj, Sobhita Dhulipala among others are seen in the teaser which also features several war sequences. One of the sequence features leading ladies Trisha as Princess Kundavai and Aishwarya Rai Bachchan as Queen Nandini standing face to face against each other. Lyca Productions released teaser on YouTube just a few minutes ago.

As for the teaser launch of the historical- drama, it was launched at a grand event in Chennai today along with the star cast and the team. The teaser was unveiled digitally by legendary actors superstar Amitabh Bachchan, Mahesh Babu, Suriya, Mohanlal and Rakshit Shetty.

Based on a novel by Kalki Krishnamoorthy, the film revolves around the power struggle of the Chola empire during the 10th century and will hit the screens in two instalments. Jointly Produced by Madras Talkies and Lyca Productions, directed by Mani Ratnam, the music of Ponniyin Selvan is composed by AR Rahman. PS-1 is slated for a worldwide release on September 30, 2022, in Tamil, Hindi, Telugu, Kannada, and Malayalam.