Junior NTR, who is busy with work commitments including RRR, recently took some time out to remember the works and contributions of his grandfather, veteran actor and politician NTR. It was his 96th birth anniversary on May 29, that is today and the actor paid a visit to NTR Ghat which is a tribute of sorts to the actor’s contribution in the field of acting and politics. 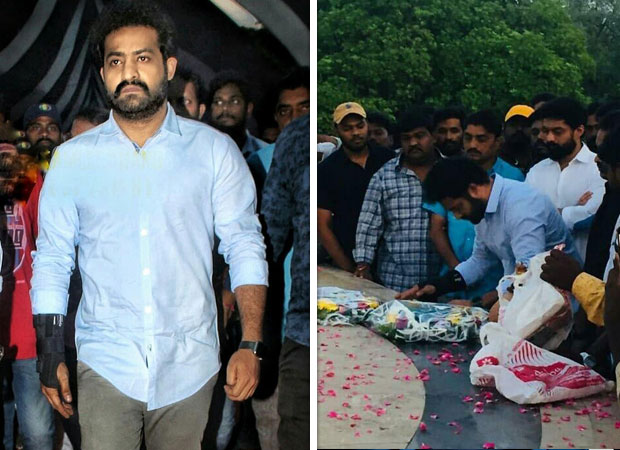 In a recent set of photos that have been doing the rounds, we saw the RRR actor paying his respects grandfather and veteran actor-politician NTR  and he was accompanied by his father Nandamuri Kalyanram. His photos from NTR Ghat show that Junior NTR became a little emotional remembering his grandfather on his special day. The said pictures have become quite viral on social media as fanclubs have been sharing the same on many platforms.

Recently, as a tribute, a film was made on the life of Nandamuri Taraka Rama Rao aka NTR. The film was a two part series portraying his struggles as an actor and later as a politician and featured Junior NTR’s uncle and one of NTR’s sons Nandamuri Balakrishna aka Ballayya playing the leading man. On the other hand, Junior NTR had maintained that he wasn’t keen on playing his grandfather onscreen.

Coming to RRR, the film brings together Junior NTR along with Ram Charan and SS Rajamouli. It also stars Alia Bhatt, Ajay Devgn amongst others and is set in the pre Independence era. The actor is expected to play the role of freedom fighter Komaram Bheem in the film.

Also Read: Is Bahubali director Rajamouli spending these many crores on the introduction scene of Junior NTR in the Ram Charan – Alia Bhatt film RRR?