The Adivi Sesh Major fever has taken over the country, with overwhelming love pouring in for the film and the star’s performance from all corners of the country. Adivi accompanied by co-stars Saiee M Manjrekar and Shobhita Dhulipala recently created major uproar on the streets of Vizag as they travelled in an open jeep on their way to the screening. Witnessing a never-seen-before madness and craze, that speaks volumes for Adivi Sesh’s fandom, the locals hooted, waved flags, and shouted out the actor’s name as the jeep drove by Visakhapatnam city. 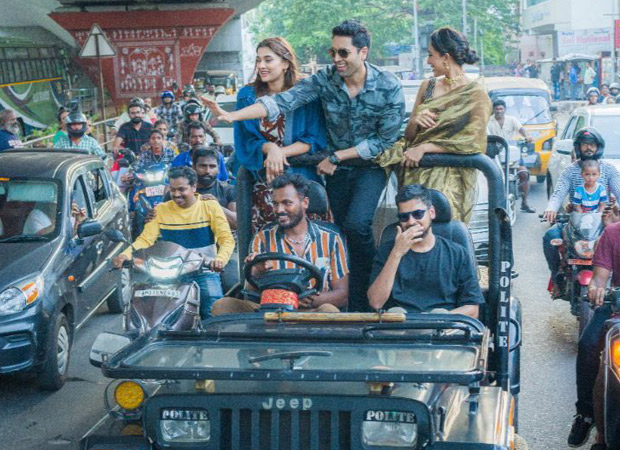 A first of its kind promotional activity, the makers of ‘Major’ organized this jeep and bike rally in the largest and most populous city in the Indian state of Andhra Pradesh truling standing out as it allowed fans a closer interaction.

Says Adivi Sesh, “I’m truly moved by the reception we received on the streets of Vizag. It was complete madness as fans were waving and hooting and it was a really incredible experience to witness this firsthand. I’m humbled by the love we received from the locals.”

Apart from creating a massive buzz on the streets of Vizag, the team also received a standing ovation and major praise from the audience at the screening of the film in a popular single-screen theatre. Much like the reception ‘Major’ received in other key cities including Pune, Jaipur, Bangalore, and Mumbai, the screening at Vizag too had fans waving flags and leaving theatre screens teary-eyed and moved.