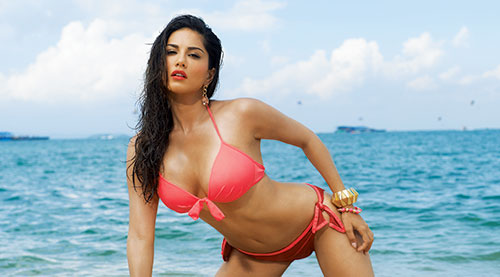 There is a newfound image that Sunny Leone has managed to build in the fortnight gone by. While she has made it quite clear that she is not really looking for reinvention, she has pretty much also made a statement that she isn't a pushover either. With a solid resolve around the manner in which she wishes to take her Bollywood career further, she has her priorities already set. This is further getting reflected in this week's release Mastizaade, which is entirely riding on her star-power. Over to the woman who has One Night Stand lined up as her next release.

Mastizaade has ton loads of skin show on display. Guess diehard fans of you are happy feasting on as many as two of you on the big screen.
The film is shot at beaches, resorts and pools - it makes sense to be in that kind of attire due to the setting. Of course I can't be seen in a bikini when it doesn't make sense. However on a beach, a bikini does make sense. (Laughs) If I am in Antarctica, then you won't find me in a bikini.

After Ek Paheli Leela, this is yet another film of yours where you are in a double role. You seem to have an affinity for double roles?
In Ek Paheli Leela, I was playing two characters in two different time period. However, Mastizaade is my first actual double role where I am playing twin sisters. It was more difficult this time around since both versions of me are in the same frame in number of scenes.

This is also your first out and out comedy. You could at least let your hair down, right?
Yeah, it was a lot of fun making the film. I had just got off making Ragini MMS 2 when I was approached for Mastizaade. When I heard it, I found it funny; it had good comedy to it. During shooting too, I ended up having so much fun on the sets. To have actors like Vir (Das) and Tusshar (Kapoor) around me was great and as a producer, Rangita (Pritish Nandy) has been amazing. To top it all, Milap (Zaveri) has written amazing dialogues for the film.

Talking of Milap, he is someone who comes with an insane sense of humor. Did you click with him instantly or were there some discomforting moments when he got into the details of the script?
(Smiles) I didn't feel any discomfort per se. When he gave me the narration of the first half, I found it really funny. Then when the actual script came to me, there were certain moments where I wasn't too sure, so I asked Milap if they could be changed. Both Milap as well as Rangita were very nice and they said that they wanted me to be happy. They happily changed it. Most of the stuff that I did in the film was the kind that I was comfortable with.

In the film, you are playing a bombshell and a sweet girl next door. This must have really required you to modulate your acting skills?
I know people find it really hard to believe but it was a little more difficult to play Laila (the bombshell) than Lily (the nerd). Lily is someone who is a little clumsy and makes crazy faces. It was a lot easier to enact her part; it was pretty relaxing. On the other hand to change back into Laila was tough. These are two over the top outrageous characters.

You must be glad that people are seeing you in two different avtar.
Audience have certain expectations from me and hence there an element of glamour and sexiness to Laila. Since Lily is very different, I am excited for people to see a different character. I am hoping that they like it. When you are making an adult comedy, people know what they are going to get on screen... So when they watch Laila, they get glamour. On the other hand Lily is just me.

Mastizaade is an out and out adult entertainer. Since you have acted in adult genres like Jism 2 - an erotica and Ragini MMS 2 - a horror flick, how do you see the graph going for you?
It is just the certificate rating (A) which is the same; otherwise my films are on different levels. Mastizaade comes with a lot of funny things and comedy. I have grown up on the likes of American Pie, Wedding Crashers, Hangover and other Adam Sandler movies. Physical comedies, comedy of errors, adult comedies - I find them really exciting. These are popular genres in the U.S. It is so hilarious to be watching them and now I am so happy to be able to make such movies in Bollywood.