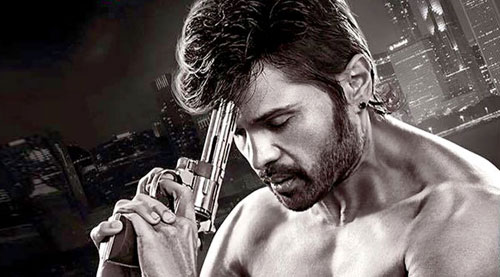 He may well be a composer at heart. However when it comes to being an actor, Himesh Reshammiya indeed appears to have affinity towards thrillers. His debut flick Aap Kaa

Now he has picked up a thrilling subject again in the form of Terra Surroor.

"It is quite apparent that Himesh likes this genre, and it is gaining him good results as well," says an observer, "Moreover, by its very genre, a thriller lends ample space for music. Whether it

is Teesri Manzil in the era gone by or Gupt in the modern times, a musical thriller - if made well - can find very good space for music. This is something that Bollywood revels in, as

action and music come together as a lethal cocktail."

No wonder, T-Series and HR Musik's Teraa Surroor has found itself on a solid footing, what the promo of the Shawn Arranha directed film turning out to be much grander than expected.

"The fact that the film has been shot in Dublin lends it a very lavish look," our source informs, "The film has a very wide canvas to it and while it looks as big as it gets, the fact remains that

it is all due to extensive nine month period of pre-production that went into it. What you see on screen needed a lot of work behind the scenes to make it perfect. The film promises action, music

and thrills in equal proportion. Of course at the core of it all, there is a love story laced with a strong suspense element. Add to that a polished look that Teraa Surroor carries and you

have a big screen experience waiting to be unleashed."

Moreover, while Himesh Reshammiya is the central protagonist with debutant Farah Karimi - a stunner by all means - joining him as the leading lady, there is further credibility coming in with a

"Shekhar Kapoor last did Vishwaroopam with Kamal Haasan. Now he is doing Teraa Surroor. Naseeruddin Shah and Kabir Bedi are veteran actors who lend a lot of weight to the film. These

However what matters at the end of it all is for the central protagonist to shine in the narrative. Now if the lean-mean look of Himesh is any indication, coupled with the fact that there is a

distinct change in the body language, dialogue delivery and overall mannerisms, and rest assured Teraa Surroor would be talked about for weeks to come.