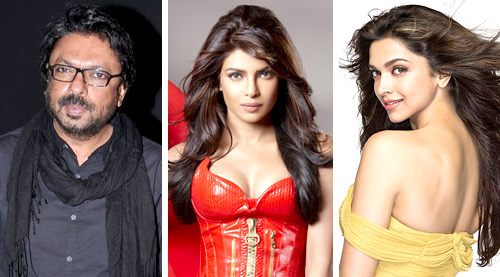 "I think it is going to be Art. It is so beautifully done," said Priyanka Chopra in a Bollywood Hungama exclusive interview about the much-talked-about song with Deepika Padukone in Bajirao Mastani. "There is a big misconception that it's Lavani, it's not. It is actually folk mixed with Classical. It is a really really interesting song. I was really happy that I was doing it with Deepika because it needed a co actor who is supportive rather than being competitive. We've known each other for a long time. I think I was the first person from the film industry that she knew when she came to Mumbai from Bangalore. We had a great time shooting this song," Priyanka said.


Sanjay Leela Bhansali who is known for high octane drama in his films, wanted Priyanka and Deepika to get into the method mould of acting and actually be competing with each other in real life so that the sparks fly off in the movie as well. "All the time me and Deepika were sitting in a corner getting updated about each other's lives. This was much to the disdain of Sanjay sir. He would come and say every time that actresses should be competing with each other, then they are better, stuff like what is she wearing, jewellery etc. He was very disappointed. Tum dono van se hi phugdi karte hue aate ho," Priyanka said laughingly.


After the super response to her performance in Mary Kom, Priyanka is all set to be the main lead in Gangaajal 2. "What I am excited about Gangaajal 2 is that in 36 days my film will be over. After Bajirao Mastani, to shoot a film in 36 days blew my mind. It is an extremely relevant film and very very real. I admire Prakash ji very much as a Director. He is a fine writer plus he is acting in the film. He is an educated, eloquent man, well spoken, knows about the world. At the same time has an opinion," Priyanka said excitedly.