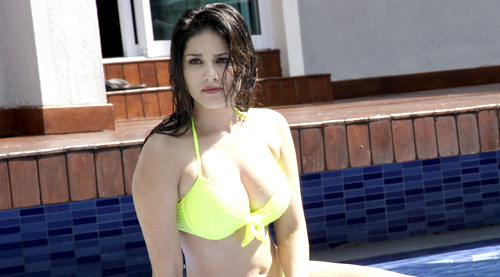 Now that Ek Paheli Leela is a success, your next release Kuch Kuch Locha Hai is around the corner. What are your thoughts?

I'm very nervous as I was with the last movie. At the end of the day you don't know what the audience is going to like. I'm happy I have Ram Kapoor on my side this round. Takes a little of the pressure off because he is the hero of the film and he also has a large fan base.

After Leela what can your fans expect from your new film?

Well, this film is so different from all the others. It's my first comedy film and it's much much lighter then all my other films.

How much fun was KKLH to shoot?

It was so much fun. I am very good friends with the director Devang Sir (Dholakia) and he is one of the few people to have supported me through a lot here. Many times he's been standing with me in my corner for support when no one else was there.

I believe for the first time you were relaxed and friendly on the sets?

We laughed a lot on this set and it was a family setting. Every day we had lunch together as a group and almost every night the same for dinner. I would make a Devang film anytime.

Ram Kapoor and you seem like studies in contrast. How was the experience of working with him?

He is a blast. He is a great actor and I learned a lot from him. We developed a great friendship right from the very beginning and laughed a lot on set.

Other than the title rhyming there are no other similarities. It's easy for people to remember and very clever on Devang's part to create such a catchy title.

Have you signed any new films. What are your big plans for the rest of the year?

There is so much happening this year. A lot of the films that will release are very different from each other. Mastizaade is an adult comedy and One Night Stand is more in the drama space. I'm very happy with how that movie is shaping up.

Finally, your thoughts on Mastizaade?

Well it's funny, risque and completely over the top but as I say in most interviews. It's a fictional story and it's not real. There are moments I'm sure people will think are over the top but that is what Milap Zaveri created.

Was it fun to shoot?

All I know is Milap was sweet to me and the boys had more crazy moments then I did. I had a blast shooting this movie. It's a double role and one sister is closer to the real Sunny that my friends and family know and one is exactly how the industry sees me. I think that is what I'm most excited for people to see. I related more to Lilly the dorky sister then to Laila who is exactly how the world sees me. Lilly might outshine Laila but you'll have to tell me if you agree when you watch the movie.