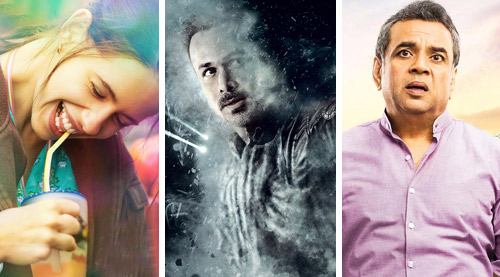 If First quarter of 2015 was pretty terrible with just a handful of films [Baby, Badlapur, Dum Laga Ke Haisha and NH10] working at the box office, there has been

a jolt to Bollywood like never before. Quarter two hasn't been any impressive either with films struggling to gain even 10% opening. This is for films with some face value at the least because the

rest are finding themselves out of theaters after first weekend itself, what with 0% to 5% occupancies greeting them. No wonder, the industry in general is reeling with the kind of failures that

have been encountered for an extended period of time.

Why is industry in this shape? And will the situation improve? Let us hear it from the experts.

There are multiple factors which are contributing to the failure of the films and one of the major reasons is not so affordable ticket prices at cineplexes. With handful of stars who are over

choosy, the count of big tickets has definitely come down in the last couple of years. The major chunk of box-office returns comes from them and this year some of them have also failed. Perhaps

ours in the only industry that is surviving on one golden word called 'hope' and we will bounce back and entertain all. I am very optimistic about the coming months which will spring many

We, as an industry will have to churn out better films which are more economical so that they become viable for all. This will lead to more announcements of films, of which we are quite hopeful. We

are quite hopeful of the future in entertainment, especially movies.

Most of this money is not pumped back into the system but is invested in real estate & similar assets. Unless fresh money comes back into film content creation, the crunch will continue in 2015. TV

is becoming more lucrative, since what the channels make, comes back for more commissioned shows.

out week after week. The focus unfortunately is on delivering great weekend figures by charging more from every movie goer rather than increasing the business by increasing footfalls. The only way

to genuinely improve the business from here is to ensure that more people come to cinemas to watch the movies! Looking more specifically at the entertainment industry, a lot of factors are steadily

changing the dynamics and the working ways. Hopefully, the economics attached to the films will improve to give the entire value chain the scope to earn

I feel the next six months are very crucial and if we do not see films performing, then the industry is going to face a bigger crisis. Deep down I feel this is just a phase and good days are bound

It's high time that our producers, directors and stars wake up and start making films instead of making projects! Nowadays you can't fool the audiences.

Kareena Kapoor Khan gives a glimpse at her…