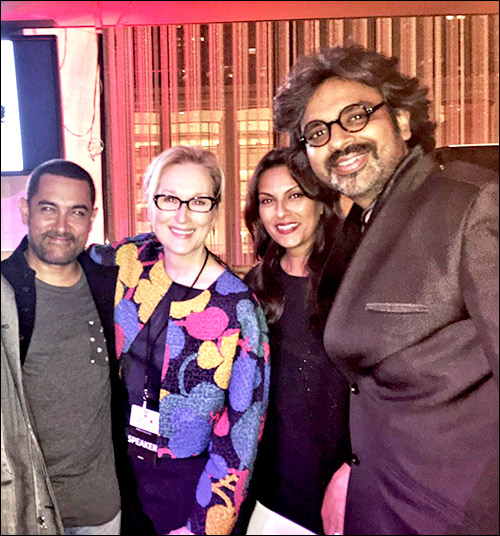 We all are well aware of the activist side of Aamir Khan, who started Satyamev Jayate to spread awareness about the different issues existing in India. Taking another step further in his attempt to fight for the social causes, Aamir Khan received another honour, wherein he was given an opportunity to interact with globally renowned names at the New York Summit that was held recently.

Celebrity fashion photographer Avinash Gowariker who was also a part of the Summit took to Twitter to express his fan moment as he got himself clicked with Aamir Khan and Meryl Streep in one frame. Talking about it, Gowariker tweeted, "Fan moment! Met #MerylStreep! Went with @aamir_khan to The Women in the World Summit in New York last night. @Shaziaqg"

Just like the reality show in which Aamir Khan discusses about the evils in our society, during this 'Women In the World Summit', the actor raised issues of female infanticide/foeticide, gender discrimination and honour killing among others. He further also added that change is a must in this society and when it has to be brought about in the mindset of more than ninety percent of the population, it has to be done with love. However, he further even addressed the issue of rape, wherein he asked the rapists to be punished severely and treat the victims with respect and care. Meryl Streep too extended her support for women rights.