Shah Rukh Khan, over his 25 years of career in Bollywood, has won innumerable hearts with his wit and charm along with his heartwarming performances. The global icon has wooed the audience worldwide with his acting and performing skills.

Shah Rukh Khan is undoubtedly one of the most followed celebrities on Twitter. The actor recently expanded his Twitter family to 33 million and shared a special video to thank his followers. The actor, who is very active on social media, time and again treats his followers with insights into his life. 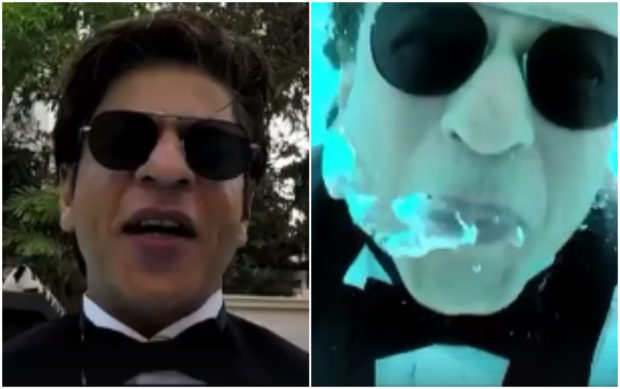 Shah Rukh Khan keeps his fans updated with his daily happenings through social media. He engages with his fans across the globe through interactions. His #AskSRK sessions are a witty treat to his audience as he answers to their questions.

As the actor completed 33 million followers on Twitter, Shah Rukh Khan thanked his followers with a special video featuring him donning a tuxedo and cool dark shades. The actor took out time to shoot a special video wherein he mentioned this video to be one of the most special in the last decade. He shared the video saying, "This didn’t go as planned...but on a lazy Sunday afternoon, with my limited floatation expertise..this is the best I could do! Judge nahi karna, feel karna...Thx."

SRK further said, "I thought everytime we reach a big number, I should always do something special for you. But, I normally don't get the time, but today I've got the time. So I gelled my hair back, I've worn my coolest dark glasses and I am even wearing a bow-tie if you notice a full tuxedo. And today, I  want to give you the most overwhelming, loving message that I've given you in the last decade. Listen to it carefully because this is very very heartfelt."

Shah Rukh Khan took to the pool wherein he goes underwater and his iconic dialogues play in the background as a special treat to his audience. The actor further said, "You heard every word of what I said,  it was right from my heart and so overwhelming that I'm running out of breath. Lots of love to you all."

On the work front, Shah Rukh Khan will be next seen in Aanand L Rai's Zero featuring the actor as a dwarf for the first time. The film stars Anushka Sharma and Katrina Kaif. It is scheduled for Christmas 2018 weekend.

This didn’t go as planned...but on a lazy Sunday afternoon, with my limited floatation expertise..this is the best I could do! Judge nahi karna, feel karna...Thx. pic.twitter.com/50miTK7QKK