Anil Kapoor is a true rockstar – on and off screen. He loves to dance and does not leave one opportunity to floor his fans with his characteristic dance step from Ram Lakhan. He was present with his buddy Salman Khan, Jacqueline Fernandez from Race 3 at the dance reality show Dance Deewane and my god, the whole crew brought the house down with their awesome sauce steps. The show would have been left incomplete if Anil, Salman was not made to groove. What’s more? Anil teamed up with his most celebrated co-star Madhuri Dixit who is one of the judges of the show. Salman grooved with Jacky in turn. Man, it was a sight to behold. Especially the moment between Anil and Salman. They re-enact the classic Ram Lakhan step and we are left asking for more. 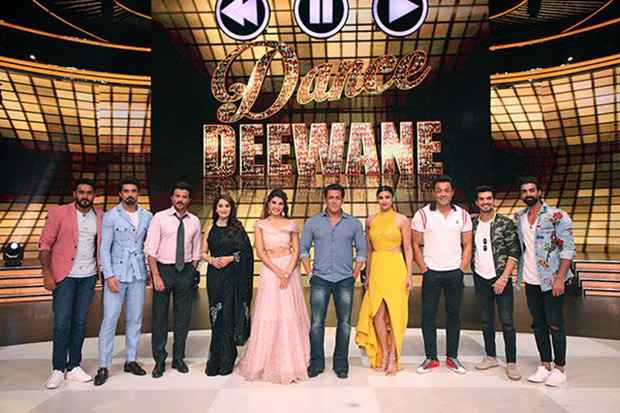 Salman Khan is making sure that Race 3 is promoted well. Directed by Remo D’souza, the film is a third sequel of the hit franchise originally headlined by Saif Ali Khan for first two parts. Let’s see if Salman is able to fill in his shoes. The trailer generated mixed reactions. More than Salman, the focus was on Daisy Shah who was trolled on internet for her dialogue ‘My business is my business, none of your business.”  Thanks to all the trolling, the film got a lot of publicity.

After Race 3, Salman will be seen in Bharat which is also a comeback film for Priyanka Chopra and will feature Disha Patani.