Priyanka Chopra is enjoying her free time with her rumoured beau Nick Jonas in India. The actress, who arrived secretly, last week with Nick in Mumbai, has been spending quality time with him and her friends in Goa. After spending a date night in Mumbai, she headed for a vacation in Goa along with her sister Parineeti Chopra. The sisters, who reunited after a long time, are thoroughly enjoying the beautiful rainy weather. 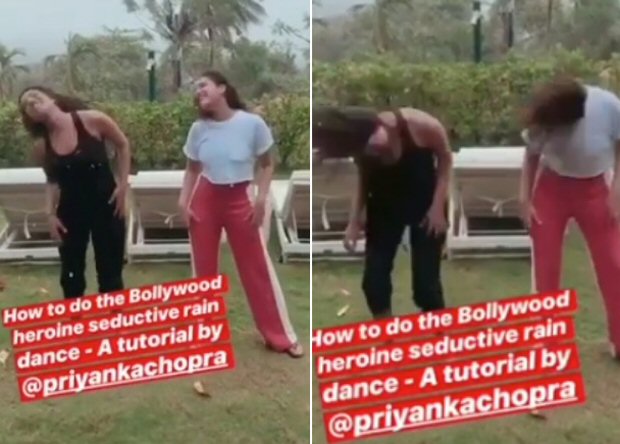 Parineeti and Priyanka seem to be having a lot of fun in Goa as they shared hilarious videos on Instagram. The two ladies were singing 'Tip Tip Barsa Pani' and dancing to it while enjoying the stormy weather. Then, Parineeti shared another video of them doing some retro seductive rainy dance moves and captioned it, “How to do the Bollywood heroine seductive rain dance. A tutorial by @PriyankaChopra.” They did the head shake in the hilarious boomerang video. Ranveer Singh, who is close pals with both the sisters, responded to the video with simply “hahahahahahahahahha” comment.

On the work front, Parineeti Chopra has an array of projects in the pipeline. The actress recently wrapped up Namaste England with Arjun Kapoor. The film is scheduled for Dussehra release. She will be next seen in Sandeep Aur Pinky Faraar with Arjun and Kesari with Akshay Kumar.

Priyanka Chopra, meanwhile, will soon begin shooting for Ali Abbas Zafar’s Bharat with Salman Khan and Disha Patani. The film is likely to begin in August or September, this year. She also has another Hollywood project lined up, Isn’t It Romantic. The film stars Adam Devine, Liam Hemsworth and Rebel Wilson. It is slated to Valentine’s Day release, next year.