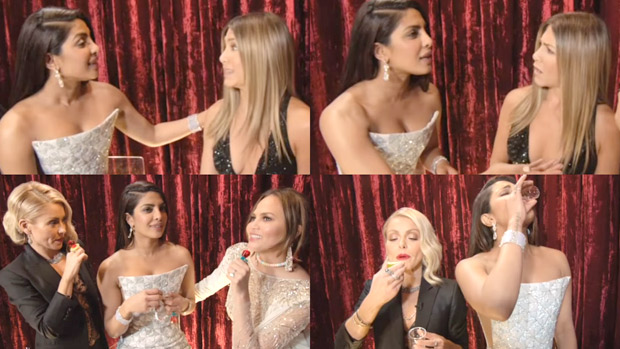 The 89th Annual Academy Awards were nothing short of exciting as many of favourites won at the awards night along with a major mix up with Best Picture at the end of the show. Priyanka Chopra made her way to the Oscars 2017 for the second time and this time around was more comfortable and chilled out.

While that was the case, most the celebrities were seen enjoying backstage.  Among the celebrities included Justin Timberlake, Taraji P Henson, Jason Bateman, Vince Vaughn and Priyanka Chopra. Celebrity chat show host Kelly Ripa was joined by Priyanka and model Chrissy Teigen who were having fun time downing Tequila shots and answering questions. Priyanka then called Jennifer Aniston who was passing by the hallway to join their interview. Then, Priyanka went ahead and asked her, "Who's your free pass at Oscars 2017?"

Well, no one answered the question but it sure was fun to watch Priyanka downing shots and chilling backstage with celebrities. On the work front, Priyanka Chopra is gearing up for the release of Baywatch in May 2017.