The celebrities always make sure to keep themselves in shape and healthy by trying different types of physical training. Katrina Kaif is one such celebrity who is a fitness enthusiast. The actress makes sure to take some time out from the daily schedule to have a great workout session. Even during the choc-o-bloc schedule, she never missed a day of the workout. But, she has found new workout buddies in Sidharth Malhotra and Aditya Roy Kapur. 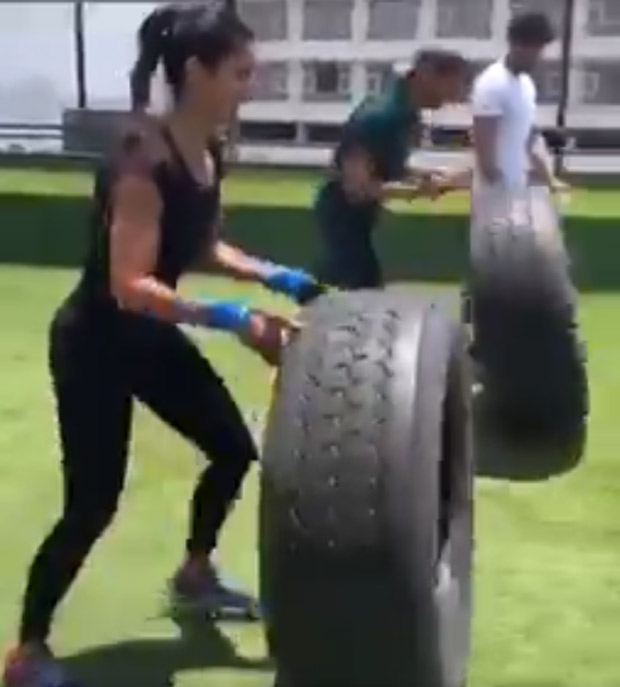 Just a day ago, Katrina Kaif was seen doing her daily workout session with celebrity trainer, Yasmin Karachiwala. She was lifting up a tyre during her workout session when Sidharth Malhotra and Aditya Roy Kapur joined her. The actress somehow ended up in a competition with Sidharth as Aditya was seen motivating him. Sidharth captioned the video, “Prepping for the Indian #Avengers ????#KatrinaKaif #AdityaRoyKapoor.”

On the work front, Katrina Kaif has two big projects lined up. One is Aanand L. Rai directorial Zero starring Shah Rukh Khan and Anushka Sharma in the lead. The film is set to release on December 21, 2018. The other one is Vijay Krishna Acharya’s Thugs of Hindostan starring Aamir Khan, Amitabh Bachchan, and Fatima Sana Shaikh. Both the films are scheduled for 2018 release. The film is set for November 2018 release.