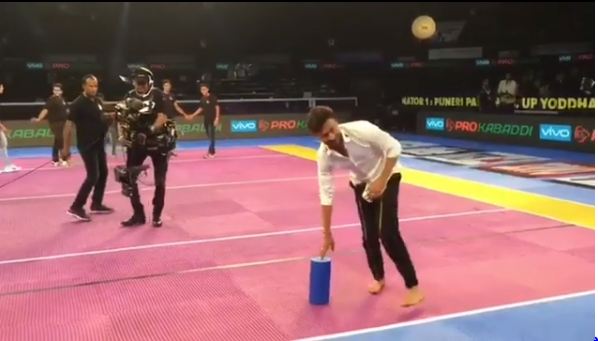 Irrfan Khan, who is currently promoting his upcoming film Qarib Qarib Singlle, attended the Pro-Kabaddi match in Mumbai during the promotions.

Irrfan Khan attended the match between Patna Pirates and Haryana Steelers that took place on Monday, 23rd October. The actor not only enjoyed the match but also indulged in the sport himself. The actor was seen playing Kabaddi with the players in full gusto and excitement.

Irrfan Khan is currently busy promoting his upcoming film Qarib Qarib Singlle starring him as Yogi and Parvathy as Jaya. Parvathy, who has served the Indian film industry with her strong performances in the Malayalam, Tamil and Kannada films for almost a decade, will make her Bollywood debut with Qarib Qarib Singlle. The film showcases the breezy romance of the unusual and fresh pairing of Irrfan with Parvathy.

The story promises to connect with single people and even those who have found their partners through online dating platforms. The relativity of the content is probably one of the reasons why the trailer has struck a chord with the audience.

Presented by Zee Studios, Qarib Qarib Singlle is A Jar Pictures production and is helmed by filmmaker Tanuja Chandra, the film is all set to release on 10th November 2017.