Hrithik Roshan has made all of his Chinese fans go gaga over his jaw-dropping looks ever since the poster of his movie, Kaabil was released in China. Hrithik is on a visit to Beijing for the movie’s premiere which will be released soon. Over his stay, Hrithik is seen spending time with his fans who are overjoyed with the fact that amidst his busy schedule, the actor is taking out time for them. 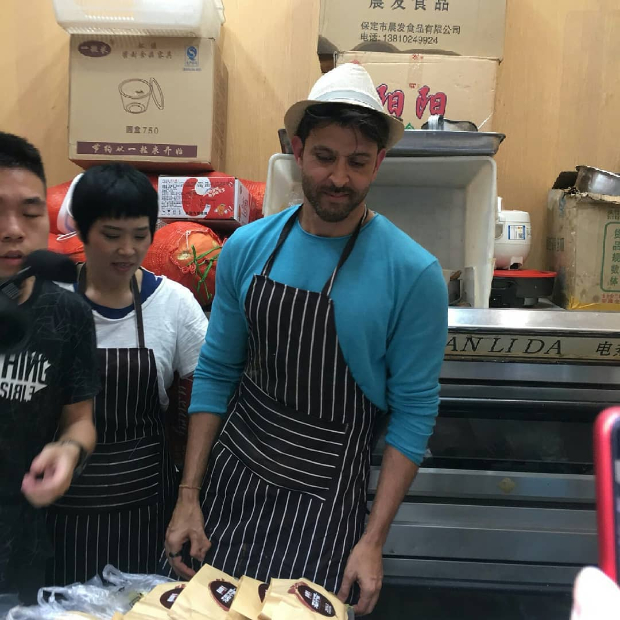 The actor in his recent Instagram post, proved himself to be one by making traditional local flat wheat noodles and unravelled the glutton in him. The actor was also kind enough to serve the noodles to his fans at a local Chinese food joint where the fans are seen in love with their ‘Da Shuai’, Hrithik. The fans looked so overwhelmed by the gesture that they were almost in tears.

Hrithik Roshan is not only popular among Indian fans for his awe-inspiring personality but the Chinese fans also coined the name, ‘Da Shuai’ which means extremely handsome. The actor is inundated with tons of messages on his social media handles from his East Asian fans.

Kaabil features Hrithik Roshan and Yami Gautam as the lead pair for the first time on the big screen.

Hrithik Roshan will be slipping into the character of a Mathematician for his upcoming film, Super 30, who grooms 30 students or the competitive exam of IIT-JEE. The film will be releasing on 12th July 2019.

.@hrithikroshan was kind enough to serve the noodles to his fans at a local Chinese food joint during #Kaabil promotions | @realbollywoodhungama

.@hrithikroshan gets in work mode while learning how to make flat wheat noodles in China | @realbollywoodhungama