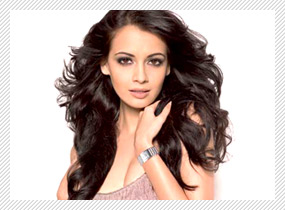 Promptly at 3.45pm I knock on the door of Dia Mirza and Sahil Sangha's Born Free

Entertainment. To my surprise, everything's the same in there since the first time I walked in

two years ago. I am guided to Sahil's private cabin to talk to him on their second outing -

air of an actress and welcomes me with a warm hug that suggests that despite being the busiest,

she seems the happiest at this phase in her professional career. You get that feeling when you

meet her. She's open, welcoming, warm, more concerned about your comfort than her own. Why?

samosas and jalebis. That's why! Anyway, up close, Mirza's determination to succeed is almost

tangible. She might be upbeat and cheery, but there's an intensity and a single-mindedness about

to Bobby Jasoos, the film. With two more movies being planned, and the Vidya Balan one

going on floor in a month and a half, one thing is certain; Dia Mirza is now spreading herwings

Bobby Jasoos isn't a 'murder you solve' story is it?
I think what's exciting for all of us is that everybody has a preconceived notion of what a

detective film should be, and in many ways Bobby Jasoos breaks that mold. More than

anything else, the film is a journey of a character and a coming of age story of what a woman

wants to be. The milieu, the world, the flavors, characters, and Bobby herself, all of this

combined will break the prototype of what a detective film should be. From the word go, I

recall, when Sanyukta Chawla even gave me the one liner of the story idea to me, I was most

fascinated by the fact that it wasn't a typical detective film.

You got a call from Vidya when you were at the airport. Did anything like Argo happen

there? Were you stopped and questioned?
(Laughs) I just had my mother and Sahil rush to me asking, "What happened?" I was like, "The

best thing in the world just happened." And of course, Vidya being Vidya kept the suspense

lingering. She played it up quite well. Actually she wanted all of us on a con-call and wanted

to break the news that she's doing the film. Honestly, we were just waiting to hear back from

her. It was a special day. The crazy thing was we were going to Delhi to work out our wedding

dates and Vidya's call put our entire wedding plan into a tizzy. But her call was also the most

exciting thing that happened I should say.

A second film of a two year old production house - a new director - Vidya Balan. Does this

make it a risky proposition?
So far, everyone we've approached for the film, be it the technicians or actors, have said 'Yes'

from the word go. That is a great indication that we are propelling the right energy and moving

in the right direction. With Love Breakups Zindagi, we proved beyond doubt that we were

able to make an aesthetic film. We made sure that we made the film in a budget, put it together

and release it. The aim and aspiration of Born Free is to continue to offer opportunity to new

and credible talent. The fact that Samar is a first time director is inconsequential. The

opportunity is provided because the writing has come from his gut and he has lived this story.

This isn't just my conviction or Sahil's conviction but Vidya's too. Bobby Jasoos isn't a

houses too? Like how Balaji formed with Dharma and Dharma formed with Phantom?
Alliances happen when minds meet and people connect. When two well-intentioned people come

together, good things happen. So whether it's a studio or production companies that you've

mentioned who have far more experience than us, if they provide us with an opportunity, why not?

On our own, Born Free would like to earn our recognition as an independent production company

that can execute and can give out quality work.

Who gave the name 'Bobby Jasoos'?
Bobby Jasoos was interestingly christened with Jaideep Sahni. Many years ago, when

Sanyukta met Jaideep and as script writers they were discussing the story, Jaideep had named the

character then. We registered this title eight months ago. But when Jagga Jasoos name was

revealed we were like - 'What is going on? Why are so many consciences aligned?" But that didn't

force us to change our title because we have lived with it for so long and love it.

Was Vidya your first and the last choice?
The first thing you do when you hear Vidya Balan's name as a cast member is celebrate. I've

worked with her. I love her. I've sat next to her at award functions and rooted for her. She's

an incredible talent. I've loved every step she's taken. I knew deep in my mind that somebody

special had do the part. I remember when Vidya said 'yes' to the film I sent a text to her that

I'm glad it's you." No one ever crossed my mind.

have been cast too, Secondary cast is locked by 30% and the music is being recorded. We will

announce the other cast names in a week or so.

Do we see Born Free make more movies each year now, given the fact that you're working with

Vidya Balan in just your second outing?
Since our formation, we've always wanted to release minimum one film a year. But such things

can't be planned. We're not at the risk of being in a hurry to put a project together. Sahil is

writing another film. It's an organic process.

Sophie Choudry is breathtaking in a pink…