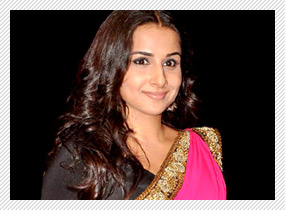 Many moons ago, she played a mom in Heyy Babyy. Then she took a bold step of mothering Amitabh Bachchan in Paa. Later in Kahaani, as a pregnant lady, she put on a fake tummy in order to seek revenge. Now in Balaji and PNC's Shaadi Ke Side Effects, Vidya Balan is back playing a mom to a toddler with Farhan Akhtar as her hubby.

Though in the interim period she was seen in Ghanchakkar which didn't quite win her the kind of accolades that she is used to, things seem to be all set for change with the promo of Shaadi Ke Side Effects seeing an out and out positive response.

While that should give a good kick-start to 2014 for Vidya when the film arrives on Valentine's Day, one wonders though why she went slow when the going was so good for her after five back to back successes.

"See, since the days of Paa and Ishqiya, I was invariably doing a film or two every year. So when I am working in films, I do read scripts or meet people because I need to spend a lot of time on that. However, I was so very busy right throughout without any break. No One Killed Jessica released soon after Paa and Ishqiya. Then The Dirty Picture and Kahaani came back to back. These were all very intense experiences for me."

It was only after the release of Kahaani that Vidya decided to take a break and in the interim period signed Ghanchakkar and Shaadi Ke Side Effects.

"When I get going with a film, my involvement is a lot more than just being an actress," says Vidya, "These are things that people can't see, but obviously I know how much work I am putting in there. When I was doing Kahaani, which took a lot out of me, I wasn't excited about any other film. It was much later that I signed these two films."

While working on her endorsement commitments, preparations for the role and many costumes trials, she got going on Shaadi Ke Side Effects, but not before getting married and enjoying her real life 'side effects', including setting up her house with hubby Sidharth Roy Kapur.

"Well, uska bhi apna ek mazaa hai," laughs Vidya, "I had to focus on doing up the house as well. I wanted to enjoy that phase than running around the studios. I wanted to settle down into the new house before diving into work."