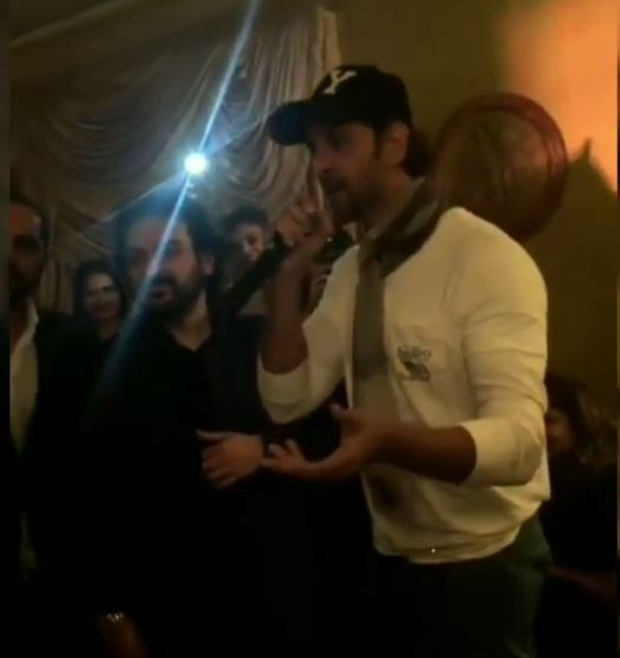 His last release Kaabil definitely became one of the memorable films of 2017 and we saw a new aspect of Hrithik Roshan as he played a blind man set out to avenge the ones who wronged him. Recently he was in high spirits as he celebrated his papa, Rakesh Roshan’s birthday quite lavishly but what we didn’t expect was to see the Junior Roshan crooning so lovingly.

It wasn’t a surprise to see many Bollywood biggies like Rishi Kapoor and Rekha in attendance on this special evening. Considering that the veteran actor-producer shares a great camaraderie with both his co-stars for years, they were welcomed warmly. Some stars even clicked selfies and pictures with Senior and Junior Roshan. Amidst all the starry party night, we spotted Hrithik Roshan donning the avatar of a singer.

In a video that has been doing the rounds on social media, especially on Hrithik Roshan’s fan clubs, features the actor singing as the crowd inquisitively looks on. While the crowd was insisting on musician Rajesh Roshan to hum a few lines, it was Hrithik who later took the lead and sang to please the crowd.

As for his forthcoming film projects, there are speculations that Hrithik Roshan will play the protagonist in mathematician Anand Kumar’s biopic and simultaneously, he will also prep for the fourth film in the sci-fi franchise Koi Mil Gaya - Krrish.