Varun Dhawan and debutante Banita Sandhu's October is definitely winning hearts. While the film released last Friday and did not have a big opening weekend, the word of mouth has helped the film. While the film is a beautiful take on an unconventional story, the music is definitely soothing and emotional. One of the amazing songs is the theme of the film which everyone has enjoyed. While many have had their own versions of the theme song, actress Elli Avram has outdone herself with her own version of it. 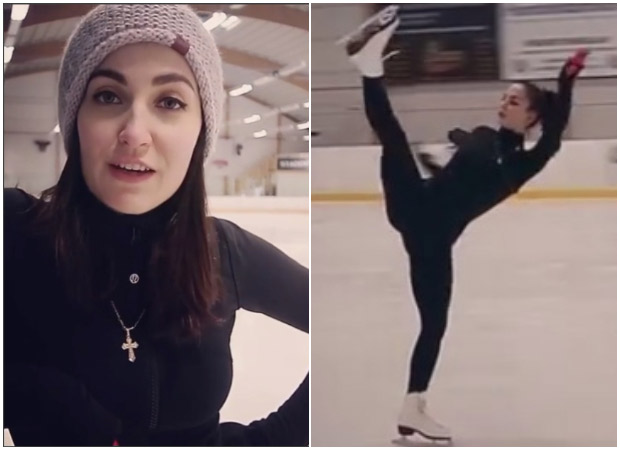 Elli Avram is currently abroad where she relived her days when she did figure skating. The actress shared a video on her Twitter while talking about her figure skating days. Then, she went onto skate on the ice on Varun Dhawan- Banita Sandhu's October theme song. She is seen dressed in black full sleeve jacket with leggings, woolen hat, gloves and necklace. She smoothly performed on the song showcasing her impeccable moves on the ice. She captioned the video, "Nostalgic❤ Sliding on the ice after long, to my new favourite, the October theme.... #figureskating #octobertheme. Can’t wait to come back to India and watch @OctoberFilm2018 @ShoojitSircar @ronnielahiri @Varun_dvn @BanitaSandhu."

As for her film projects, Elli Avram was last seen in a small role in Naam Shabana featuring Taapsee Pannu. While her future projects are yet to be revealed, the actress hosted The Great Indian Laughter Challenge.

Hina Khan flaunts her toned back, leaves her…