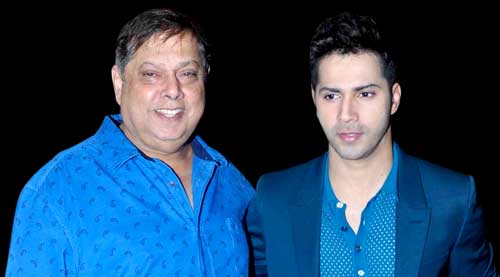 To say that David Dhawan is being a proud father would be stating the obvious. After all, Varun Dhawan has just delivered his fifth straight success in a row with ABCD - Any Body Can Dance 2. The film has now touched the Rs. 100 crore mark, and in the process has turned out to be Varun's highest grosser till date, while surpassing Humpty Sharma Ki Dulhaniya (Rs. 78 crore).

"Of course I am proud," says David Dhawan, "As a father, I have an altogether different equation with him. What is remarkable is the fact that Varun is making different choices for each of his films. Moreover, each of these choices is his own. Of course he comes home and discusses about films he is thinking of, we do give him suggestions as well, but ultimately it is all his call. So let's give the devil his due."

This is pretty much apparent with the fact that in 2015, within six months, Varun Dhawan has featured in two films - Badlapur and ABCD 2 - which are as different from each other as they can get. Moreover, with Student of the Year, Main Tera Hero and Humpty Sharma Ki Dulhaniya behind him, he is also showing the level of maturity in less than three years, which many actors take more than five years to demonstrate.

"Well, I still look at him as a newcomer only," smiles Dhawan Sr., "He still has to learn a lot, he has a long way to go. He needs to continue being true to his craft. Yes, the way he is delivering successes is good but then it is just a start. He needs to continue working hard while being focused. He cannot just sit back and relax, now that he has delivered five successes."

For someone who has been active as a filmmaker for over three decades now, and is the only one from his generation who not just has the highest number of film releases to his name but is also delivering successes till date, David Dhawan certainly knows what he is talking about.

"I have worked hard even in bad times, so one thing that you can never let go off is being on your toes," he opines, "Baaki toh sab muqaddar ka khel hota hai. Especially in our industry that matters a lot, but that doesn't mean you can just keep basking in your own glory. Celebrate karo and then move on."

While the present is indeed good for Varun, future looks mighty exciting too with Rohit Shetty directing him in Dilwale along with Shah Rukh Khan and Rohit Dhawan roping him in along with John Abraham for Dishoom.

"It is good that Varun has been accepted and audiences have been loving him. He should respect that, be honest and show humility," says the veteran director, "When on the sets of a film, he must continue to come prepared. He can't just land in there and ask for the scene. Preparation is the key. As for his conduct in Bollywood, he needs to continue respecting his seniors. That is of utmost importance."

Considering the fact that the youngster already has that in abundance and one doesn't see him letting go off that trait by any stretch of imagination.