Varun Dhawan can’t stop but share how EXCITED he is to be a part of Karan Johar’s Kalank which has a stellar ensemble cast of Madhuri Dixit-Sanjay Dutt, Sonakshi Sinha- Aditya Roy Kapur and Varun Dhawan-Alia Bhatt. The movie is produced by Karan’s Dharma Productions along with Sajid Nadiadwala and Fox Star Studios. It is a magnum opus set in 1940. Varun has already prepping for his role with choreographer Remo D’souza. 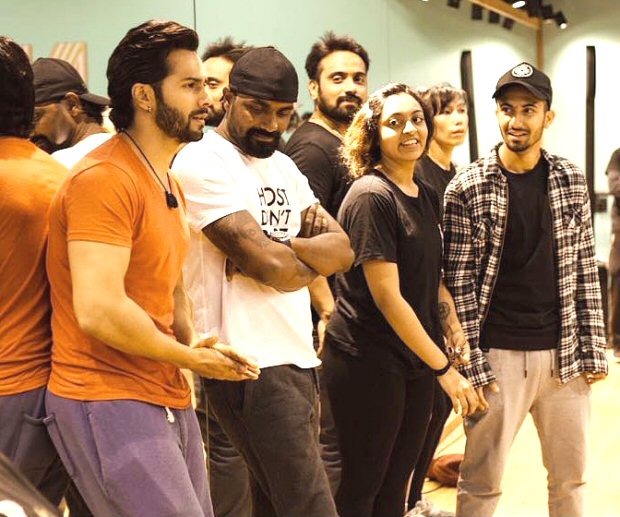 So judging this, the film will give a lot of scope to Dhawan to dance and impress us with his moves. Dressed in simple casuals, Varun was seen practising with Remo and his team. Also, he met Karan Johar at Dharma headquarters and did his look test with Madhuri Dixit, Sonakshi Sinha and Aditya Roy Kapur. He was snapped with his dad David Dhawan with Kalank clapboard. So, the journey of this epic film has begun with a BANG. We expect something spectacular with Karan this time too. The movie will be directed by Abhishek Varman of 2 States and of course over looked to the T by Johar himself.

The movie is very special for Karan because he had wanted to do it 15 years ago with his dad Yash Johar but it’s only now that the idea is materializing into reality. It previously had Sridevi but due to unfortunate turn of events, Madhuri had to fill in her shoes. The story has been penned by Shibani Bathija and screenplay is done by the director Varman himself. KJo has already erected the sets of the film and Madhuri tweeted how impressed when she saw them yesterday. Enchanted by the grandeur and overall appeal of Kalank’s vision she did not leave any stone unturned to express her happiness that she is associated with this project. This project is remarkable for one more thing: It marks reunion of most controversial couple of the nineties: Madhuri and Sanjay Dutt.