After doing two mainstream movies last year, this year Varun Dhawan will be seen in different avatars. One film October which already released on Friday. Another one is Sui Dhaaga- Made in India which is set for September release. While the actor is busy with his work schedule, he is also excited to welcome a new member into his family. Varun Dhawan will soon be an uncle. Director Rohit Dhawan and his wife Jaanvi Desai are expecting their first child. 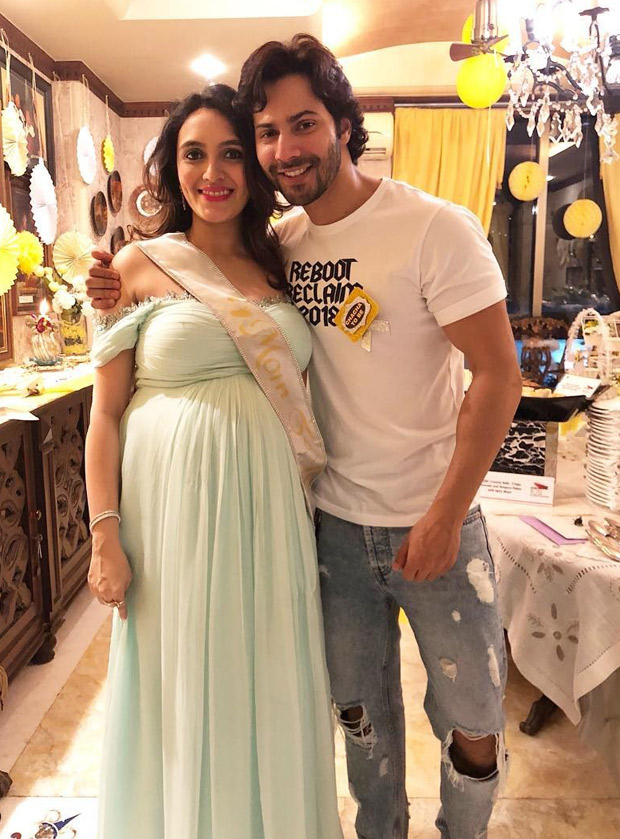 This will be Rohit Dhawan and Jaanvi Desai's first baby. The baby shower took place earlier this week with a family and close friends in attendance. Sonakshi Sinha was one of the good friends of the Dhawans who attended the baby shower. Post the celebration, Varun shared a lovely picture with his sister-in-law. With emojis as the caption, he was simply smiling in the picture with Jaanvi. The mommy-to-be was glowing and looked beautiful in an off shoulder maxi dress with a sash.

It is known Varun Dhawan is very close to his family especially his elder brother Rohit Dhawan. Not only that, he often spends time with him and his wife whenever he gets some time off from work. Varun even worked with his brother in Dishoom in 2016 alongside John Abraham.

Meanwhile, Varun Dhawan is pretty busy shooting for YRF’s next Sui Dhaaga– Made in India. The film stars Anushka Sharma in the lead. Directed by Sharat Katariya, the film is slated to release on September 28, 2018.

Just this morning, Varun Dhawan’s next project Kalank was also announced. He is, once again, collaborating with Dharma Productions and Alia Bhatt. This will be their fourth film together post Student of the Year, Humpty Sharma Ki Dulhania and Badrinath Ki Dulhania. The film stars Sanjay Dutt, Madhuri Dixit, Sonakshi Sinha and Aditya Roy Kapur. Directed by Abhishek Varman, the epic drama set in the 1940s is titled Kalank. The film which was incepted 15 years ago by Karan Johar and his dad Yash Johar has found its way and will be now released on April 19, 2019.

Also Read: Varun Dhawan’s fangirl camps outside his home for two days just to meet him!