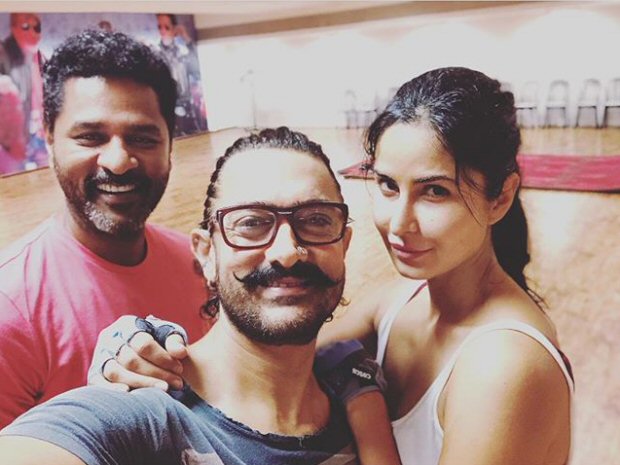 One of the most awaited films of 2018 is Thugs of Hindostan starring Amitabh Bachchan, Aamir Khan, Katrina Kaif and the newbie Fatima Sana Shaikh. The cast is leaving no stone unturned in the shooting. Earlier, it was reported that Prabhudeva would be choreographing a stellar number for Katrina Kaif and Aamir Khan.

Thugs of Hindostan: Aamir Khan and Katrina Kaif along with Prabhudeva all set for stellar dance number

On Saturday, Aamir Khan and Katrina Kaif were seen sweating it out during dance rehearsals with Prabhudeva. Katrina shared a photo from the rehearsals and simply captioned it, "Thugs." According to the reports, the rehearsal began a while back with Aamir and Katrina putting in all their efforts. Known for his quirky dance moves, Prabhudeva is making sure the song will look amazing. The shoot for the song will start on January 14.

Earlier, Prabhudeva choreographed a song Amitabh Bachchan and Aamir Khan in Thugs of Hindostan. It will be very interesting to see the megastar match moves with Aamir in the upcoming mega film.

Aamir Khan and Katrina Kaif have earlier worked together in Dhoom 3. The film also had a song 'Malang Malang' that featured both of them. The song was quite a hit with amazing dance moves and artistic action sequences.

Directed by Vijay Krishna Acharya, Thugs of Hindostan is slated to release on November 7, 2018.