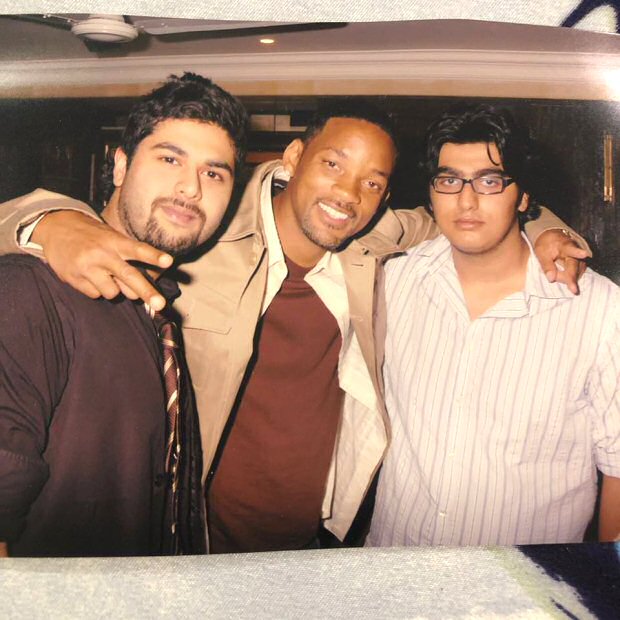 Arjun Kapoor looks dashing and is one of the most fittest actors of today’s times. But there was a time when it wasn’t the case. The actor was highly overweight and lacked confidence. But then Arjun decided to passionately lose weight, come what may. The influence of Salman Khan played a huge role in helping him achieve his role. By the time he was ready with his debut film Ishaqzaade, he had lost oodles of weight. In fact, moviegoers were left shocked when his older pictures came out as they had no idea that this fit actor battled weight issues at one point.

WOW! When an overweight Arjun Kapoor befriended Will Smith for 30 seconds

Yesterday, Arjun Kapoor himself posted one more picture from his ‘Kal Ka Arjun’ days and it’s a must see. For, the actor is not alone. He’s posing with celebrated Hollywood actor Will Smith. Also present in the picture is popular designer Kunal Rawal. Will Smith is standing smilingly between the two and giving a lovely pose. Arjun on the other hand is wearing spectacles and is feeling too shy to pose smilingly it seems. His hairstyle is different and he is wearing a formal white shirt. The funny tagline with this picture is, “Gettin Jiggy with it since 2000 !!! Major #throwback to when @kunalrawaldstress & me became best buds for 30 seconds with @willsmith !!! #freshprinceforever #badboy4life”

On the film front, Arjun Kapoor is currently shooting for Dibakar Banerjee’s flick Sandeep Aur Pinky Faraar, co-starring Parineeti Chopra. It releases on August 3. Arjun Kapoor and Parineeti Chopra will then team up for Vipul Shah’s Namastey England, which will arrive in theatres on December 7, 2018. Will Smith meanwhile was recently seen in a Netflix film, Bright, co-starring Joel Edgerton. Will Smith had come to Mumbai to promote this flick, which was unveiled on December 22 last year.