Last Updated 16.05.2022 | 9:43 AM IST
feedback language
follow us on
Bollywood Hungama » News » Bollywood Features News » These THROWBACK photos of Ranbir Kapoor and Riddhima Kapoor are too cute to be missed!

Ranbir Kapoor, who is busy with the shoot of Brahmastra in Varanasi, may have been quite pleased to see himself from his childhood days on Instagram. The actor’s childhood photo seem to have grabbed a lot of attention where he is posing with his father Rishi Kapoor along with another photo, albeit a monochrome one, of Raj Kapoor holding a baby. It seems that the photos, doing the rounds on social media, was shared by a Rishi Kapoor fanclub but it seems that they faced some mistaken identity trouble! 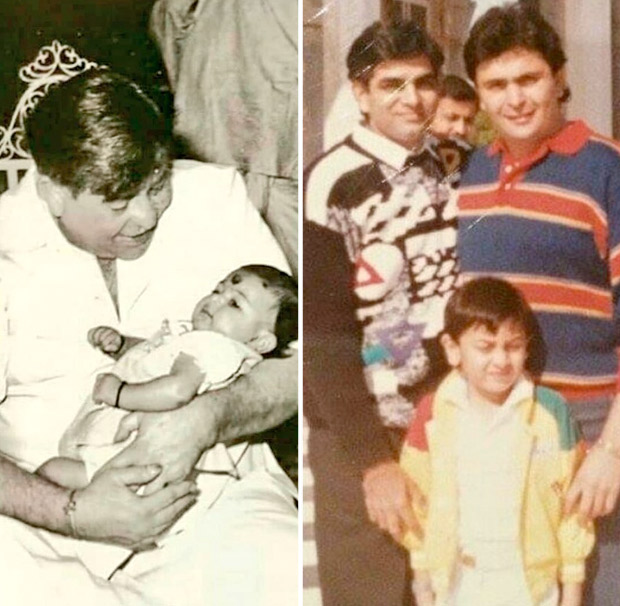 These THROWBACK photos of Ranbir Kapoor and Riddhima Kapoor are too cute to be missed!

The Rishi Kapoor fanclub excitedly shared a series of two photos, one of which had a young Rishi posing with his little boy Ranbir and the other one where Raj Kapoor is holding a baby in his arms. While the fan-club claimed that the latter black-n-white picture featured Rishi as a child, Rishi took to twitter to rectify the error. He clarified that Raj Kapoor wasn’t holding him but his granddaughter Riddhima Kapoor in the photo. Here have a look:

That is not me but my daughter Riddhima in my father’s arms. All were sitting at a “havan” being performed at home. In the next picture it is my dear friend Raj Bansal myself and little Ranbir at Padampuraji Mandir in Jaipur. Just for your information. https://t.co/c0Aaqq9I4R

Nevertheless, we must say that both little Ranbir Kapoor and toddler Riddhima Kapoor looked as adorable as ever in these photos, don’t you think so?

On the work front, Ranbir Kapoor will next be seen in Brahmastra featuring Alia Bhatt and Amitabh Bachchan in the lead role. The sci-fi superhero drama is directed by Ayan Mukerji and it is expected to release during summer 2020.