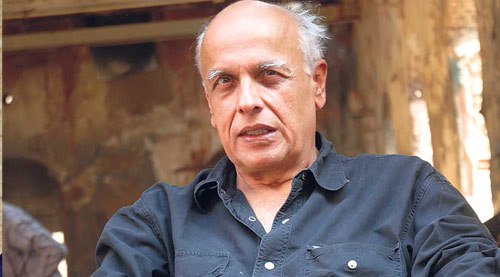 Mahesh Bhatt speaks to Subhash K Jha on the extortion death threat foiled by the cops earlier this week.


Are you safe? How imminent danger to your life?

As safe or unsafe as I've always been. The panic has been created more in the media space. I see a sense of tranquility around me. The police have taken all necessary precautions. But you've to understand that urban terrorism is not a 21st century phenomena. It's something that we had to live with in the 20th century. I want to remind you of that time in the last century when the underworld stalked our film industry. My dear friend Gulshan Kumar was brutally murdered. The industry was gripped by a fear psychosis. This aided the underworld to grow into an uncontrollable monster.


But isn't fear a normal reaction to terror threats?

That is exactly what the terrorists want. So when we give in to terror tactics we are playing into their hands. Their entire strategy is to kill or maim one, and scare a thousand people. This has been a familiar nightmare that Bollywood has lived through all these years. Each victim of terror attack in the film industry has found his own method to grapple with the problem.

Isn't that quite normal

The apathy towards the plight of the other victims of terror threats in our fraternity is a major cause for the increase in such crimes. Each one of us suffers the attack in terrible isolation.

How to tackle the problem?

The Gods are not going to descend from the skies to handle this problem for us. No Santa Claus is going to come this season and leave us a formula under the pillow for us to solve the terror menace. No! I spoke to Mr Rakesh Maria, the Commissioner Of Police, who has seen the rise and growth of the terror menace. He has seen the underworld go through all the stages of its growth and understands its dynamics in fact I've seen him evolve a DCP to Commissioner.

What did Mr Maria say?

He urges the film industry to not attempt any peace strategy with these monsters of terrorism. This terror phenomenon is now dying. By giving in and giving them money we are providing them with oxygen to go on. Rakesh Maria feels are doing irreversible damage to the film fraternity and to the world we live in.

You are saying urban terrorism should not be negotiated with on an individual basis?

Instead of this being seen as a problem that only concerns me and my immediate family we spoke about the larger problem that the film industry faces from these extortionists. The cops stepped in quickly and neutralized the gruesome attack that was planned against me. They pre-empted the attack, nabbed and interrogated the culprits and confiscated their weapons. The police have demonstrated the capacity and intelligence to protect the film industry from these people.

The fear of the family being harmed surely supersedes the larger good of the community?

I am not saying we should try not to feel that fear. We all feel it. But look at the options. We have the might of the State behind us. We are a rising power in the world. How can we possibly buckle under pressure from gangsters when the police is saying they're firmly behind us? Don't you think the film industry needs to find it spine and partner with the state machinery in bringing terrorism down?

But short-term solutions are more effective remedies to threat?
No short term solution works. It only sets up a new cycle of pain. The underworld won't go away by paying off threats. It's the economic disparity between the haves and have-nots that has brought on this. Look at the foot soldiers that the underworld employs. They are the poorest of the poor.

Who have nothing to lose?

Right. These shooters are used to intimidate an individual like me, so a message would be sent out to the entire industry and to the world. This is to let the privileged and rich know they are vulnerable to attack. They are not targeting the film industry alone. They are out get as much as they can from the world at large. We in the film industry have suffered losses. Post 9/11 the world became a different place. As a nation we need to understand terrorism can't be wished away. As a member of the film fraternity and civil society we must understand that we must co-operate with the police and deny the forces of terrorism the oxygen they get when we give in to their pressure tactics.

Yes, we have to go through the feeling of danger and dread. But we must not come to a compromise with terrorism and buy our private peace. The police have taken care of me. They've protected me. As they'd protect Shah Rukh Khan or Salman. But don't we owe it to the nation and society to send out one message: we won't buy our private peace.

Does your family share your faith in the police?

I've ever reason to believe my family shares my genes. We are privileged to have police protection. But we're merely pawns in the larger game of terror. Terrorism has to be fought by civil society.

Don't co-operate with terrorists. Please partner with the police. Otherwise you're sowing the seed of your doom. I and my family have been targeted. I have no hesitation is saying I've full faith in the cops.