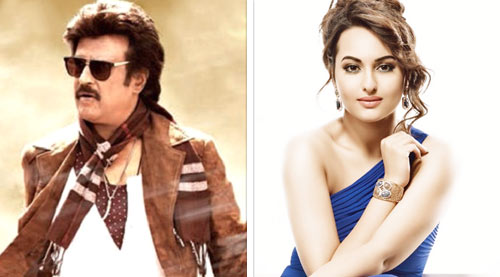 When it comes to bringing terrific attitude while dancing, one name that has been most notable in the film industry is Rajinikanth. The 63 year old actor continues to have the kind of agility and fluidity in dance movies that could well put a 30 year old established actor to shame. Now imagine being required to match steps with a legendary actor like him! Well, Sonakshi Sinha pretty much knew what she was getting into when she signed Lingaa as she had to dance to the beats while matching pace with Rajinikanth; something that was clearly a herculean task in itself.

On her part, Sonakshi made sure that she didn't give Rajinikanth any reason to complain, more so since the time was at premium as the makers had a deadline of six months to finish and release the film. As it happened, she managed it right in some quick takes and did enough to make sure that the actor himself stepped in and showered ample praises.

"After seeing the rushes of the song that they were shooting, Rajinikanth reached out to choreographers Chinni and Rekha Prakash and told them that he didn't want to stand in the same frame as Sonakshi as she was hogging away all the attention. Of course he was being humble but then compliments like these need to have some basis behind them," an assistant choreographer informs, "No wonder, Sonakshi was flattered."

For Sonakshi, it was pretty much a trial by fire experience. Though she has danced since the days of Dabangg, her moves have started getting aggressive only now. Last year she danced away to glory in songs like 'Saree Ke Fall Sa' and 'Gandi Baat', all thanks to Prabhu Dheva's R... Rajkumar. The effort has started paying off now as it was just some homework before she found herself facing none other than Rajinikanth for Lingaa.

Quiz Sonakshi about this and she is visibly embarrassed. "Come on, can you really imagine him saying that in all seriousness? I am sure he was being just nice. In fact I literally fell off my chair when I heard that. I said to him that by no means he could mean that; after all people look at just him when he is there on screen."

On the other hand feedback for her dance moves in 'Keeda' for Prabhu Dheva's Action Jackson have already brought in comparisons with none other than Karisma Kapoor and Raveena Tandon, who in their heydays were known for such 'masala' movies for the masses.

"Well, this is one compliment that I am going to cherish; after all Karisma and Raveena have enticed us with their dance moves for so long," she smiles, "When even your contemporaries come and compliment you that you are dancing so freely that it reminds of these actresses, it is something to feel good about."

With some dancing numbers waiting to be unveiled for Tevar as well, one waits to see what Sonakshi's contemporaries have to say for that.