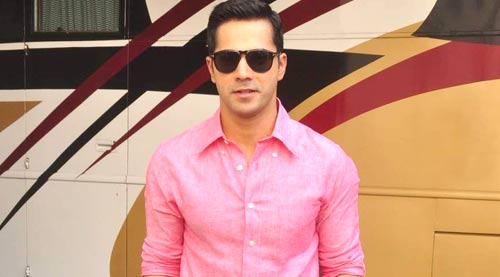 "I love the story of the film, honestly. Everyone has a right to critique it but there are so many critics now-a-days that you don't know who is legitimate and who's not," said Varun Dhawan in a Bollywood Hungama exclusive video interview with Content Head Broadband Faridoon Shahryar after his latest release ABCD2 has struck the biggest opening day collection of 2015. Dhawan is unfazed with the criticism and is totally overwhelmed by the tremendous love that people are showering on the film from all across India. "In Mumbai there is so much rain but people have still gone. So that's just love, nothing else, there just love for the film," ecstatic Dhawan junior said. Over to some excerpts from the interview:

First day opening of ABCD2 has been the biggest in 2015. How does it feel to have a Rs 14+ crore opening day?

Honestly I don't think, it has sunk in properly yet. I think more than the numbers, it's the love you get, when you hear that in Gujarat people are standing in the seats and dancing, you hear that it has taken such a big opening in North India when dance films don't do well in the north. In Mumbai there is so much rain but people have still gone. So that's just love, nothing else, there just love for the film.

The trade was anticipating that ABCD 2 will be having a super opening. You've come up with 2200+ screens while Gabbar is Back was having 3300 screens and it had an opening of Rs 12+ crores. Do you feel heartened, because somewhere now the people would be saying that you have catapulted in the big league of actors?

I don't know whether I am there as yet or no, but definitely I feel redeemed in a way. I think the release strategy by Disney was bang on. The release date was bang on. Everything worked in our favor, but like I said when there is love for a film it can go anywhere. I remember this story of Maine Pyaar Kiya, when it was released in one or two theatres in first week and then next week it increased, third week it increased, fourth week it increased. Obviously the game has changed now, when people want to see a film they go to see a film.

No I don't agree with that, because I am a fan of 3D. I am not saying every film, like Badlapur will never release in 3D, but ABCD 2 releasing in 3D is the best choice because the way you see the dance, you will feel that they are almost near you. The Prabhudeva coin toss or the bubbles coming out and the whole flag thing in the climax, so for action films or adventure films, 3D is the way to go for me.

The dancing in ABCD 2 comes across as a team effort. It is being felt that you emerge as a very fine leader in terms of the way you're taking everyone together; some of them are very fine dancers in their own right.

This was very difficult for me to be a leader and the best example I will give for this is when I was playing cricket in my building, toh ek captain chunte the aur uske andar log chunte the, toh main hamesha jab captain banta tha toh main haarta tha, always. Matlab sab log out ho jaate the aur main apne aap pe bahut pressure daal deta tha, then I would come for batting aur main bhi out ho jaata tha toh I would be like nahi yaar I am not a leader, maybe I am like a soldier, maybe I am someone who takes direction. So this was almost first time I was trying to be a leader or lead a team. Obviously I've matured a lot since then but it was all through seeing Remo sir, through seeing the real Suresh handling his people. Somehow to lead these guys, somehow I needed to win the respect in Dance. And that's a very sub-conscious level of thought. But why will they respect me if I can't dance as well as them, if I can't do the things they are telling me, if I was to use the body double for some of the stunts, if I was arrey main isme nahi dikh raha hoon, I won't dance in the background. In ABCD2, Remo sir did a smart thing, 10 songs in the film and I am dancing in each and every song. No one else has danced in all the songs. I've danced in Prabhu sir's song in background, I've danced in Chunar, and Sun Saathiya also I've danced. In every song of the film I had to dance, no matter whose song it is.

There has been criticism for writing in ABCD 2. It is being said that the dance sequences are some of the best that we've seen in the industry, but somewhere writing is something which is not up to the mark. Considering you've just done a Badlapur where the writing was really wonderful and now it is expected from Varun that you'll be taking interest as far as writing of your movies is concerned. Do you feel that the criticism is fair?

I love the story of the film, honestly. Everyone has a right to critique it but there are so many critics now-a-days that you don't know who is legitimate and who's not. I love the story, I love the flow, and when Tushhar and Remo sir told me the story I felt like it's one of the best stories I've heard in recent times, and it's the original story taken from real life. As far as the screenplay goes, as far as the moments go, these are all real life events. This is something new; we've done and there's spice and masala for everyone to watch this film. It's not only for pseudo-intellectuals, so I'll kind of challenge that thought, because when you're going to the film you'll see kids are really loving the film, clapping, you'll see them being happy. I've said this before getting into this film that we have aimed this film towards family audience and children. We have kept it that clean. I mean if you're going for a real conversation, agar 10 ladke Mumbai ke Nalasopara se jaayen Las Vegas, agar unke yahan chori hoti hai toh woh kaise baat karenge? Gaali Galaoch hoti, maar peet hoti, jo kabhi screen pe aa bhi nahi paati. So we had to get a sanitized version of that, and their behavior and try to put it on screen so it's accessible for everyone to see.