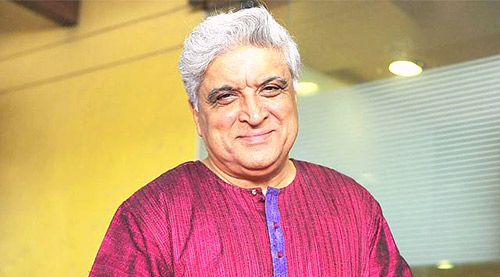 Javed Akhtar whose rousing nationalistic farewell speech in the Rajya Sabha has made him a national hero, speaks to Subhash K Jha.


What is your opinion on fundamentalist organizations and individuals threatening the secular nationalistic core of our country?

You know this is nothing, but unsavoury competition between the fundamentalists from different communities. Instead of learning desirable things from one another, the bigots

choose to indulge in a spirit of competitiveness. 'Tum itne reactionary ho? Main isse bhi zyada reactionary hoon'. This is alarming. We, the civil sections of society are too tolerant of

these reactionary elements. There's no reason to be scared of them. When I stand up and speak in Muslim gatherings against fundamentalist elements, the audience claps. Likewise in Hindu gatherings.

Maybe they can't say it aloud. But when somebody bells the cat, they approve. We haven't been able to fight communalism because we choose to target such elements in one particular community. Let's

not take sides. It doesn't matter whether the colour of communalism is orange, green or blue...we need to get colour blind to oppose reactionary elements. Please believe me; our junta needs

apolitical right-thinking responsible citizens who stand up against any kind of fundamentalism. One fatal mistake of secularists is their rather condescending attitude towards minority reactionary

attitudes. The moment we differentiate between minority and majority communalism, we're guilty of reactionary attitude...

How do you look back on the 45 years of your career as a scriptwriter and lyricist?

There have been bruises and pleasures, achievements and failures... both are equally integral to life. But, in totality, life has been kind. Without trying to be over-modest, I'd like to say that I

wasted about 10 of those 40 years. If I had worked in a more disciplined way I'd have done a lot more. That's a lingering regret. I'm trying to compensate for that lost time. But I don't think I

can. Today, I'm in competition with only with myself. If I look at the mediocrity all around me I can only get depressed.


Javed Saab, you've made poetry accessible to the common man...
Isn't that what poetry is supposed to do? If you can't communicate

your lines to the common man, then why are you making your art public? Some artistes say they don't care if their art is not understood. There should be some difference between your diary and

What do you feel about the falling standards of music in our films?

It can be best expressed by what Lataji sang Silsila-my first film as a lyricist- 'Yeh Kahan Aa Gaye Hum'. Jo halaathain ussmein kya karen? I think the songs are a part of the

narrative. If the narrative is of an inferior quality, the situations are bound to be inferior. These in turn, demand inferior songs. Songs for Kaagaz Ke Phool, Pyaasa or Baiju Bawra could

only have been possible in those films. Those songs couldn't be a part of a film today. Also, there's a kind of fear in filmmakers that audiences' attention span has shortened. Hence, there's a

frenzied tempo in the narrative at the cost of depth. When songs run at a frantic speed, words are no longer important. And since words no longer register as poetry or anything near it, lyricists

are allowed to get away with anything. The quality of music also is very unsympathetic towards poetic lyrics. The people who are extracting work out of lyricists aren't trained to understand

poetry. Earlier on, composers understood music and poetry. Sachin Dev Burman wasn't fluent in Hindi. But his sense of poetry was still impeccable. Something is wrong with society at large. In our

educational system, the Hindustani and Urdu languages are being marginalized. We're living in an era of a cultural void.

How do you manage to keep your head above water?

It has taken me a lot of time to come to where I am. When, initially my lyrics did well, I was offered a lot of films. I declined all the films where I felt I'd have to write something I didn't

want to, and couldn't. The film industry got the message loud and clear. Yeh agar likhenge to iss terah se warna nahin. I cannot go beyond my inbuilt sense of morality. Today, I work one-

fifth of other successful lyricists. And I don't regret it. You ask me how I seek out good projects. I think such projects seek me out. I admit there aren't too many filmmakers and composers I'm

comfortable with. Main to wohi karunga jo karta aaya hoon. No bad language, no grammatically incorrect metres for me. Poets can take liberties but within the given grammatical structures.

Who have been your idols as a lyric writer?

Sameer's father Anjaan...they've all written exceptional songs. I've set certain standards for myself. I believe language is for communication. What's the point of writing a song if it doesn't

communicate itself to the listeners? My father Jan Nissar Akhtar used to say, it's very easy to write difficult songs and very difficult to write easy songs. A simple language possesses a kind of

transparency which a lyricist can afford only when he's sure of his ideas. You have to be very clear about your ideas to write simply. If you enter a dark room and you don't know where the light

switches, you keep groping in the dark. I'd like to believe I know where the switches are. Ambiguity forbids simple expression. I shy away from ambiguity.

Why aren't you writing screenplays anymore?

At one stage, I felt I was becoming a mechanical scriptwriter. I felt I was moving towards mediocrity. Before that happened, I stopped and concentrated on what excited me, namely lyric writing. In

recent times, I was enthused to script my son's film Lakshya. I'll not do commissioned screenwriting. I'll write when I feel galvanized into the process. As for writing talent, Gulzar Saab

is an exceptionally talented dialogue writer. But yes, we need script writers. There's dearth of new ideas among them. The good screenplay writers are filmmakers themselves, for example Karan

Do you see hope among our contemporary filmmakers?

Even if we lose everything else, we shouldn't lose hope (laughs). Sanjay Leela Bhansali (whom I haven't worked with so far), Karan Johar, Ashutosh Gowariker...they're extremely talented.

Technically, our films have progressed. The same cannot be said about the content. And the problem is outside the film industry. Earlier on, we had ideals philosophies and values upon which the

heroes and villains of our films were based. But without sanskar, it's difficult to tell black from white. Films do not address themselves to social issues any longer. There're no Sujata or

Paigham being made. Earlier, the mill owner was the bad man and the farmer was good. We no longer know who's bad and good any longer!

To what do you attribute this aridity of moral values in art?

Somewhere, our society's collective morality is lost. There's a kind of moral confusion in our society which reflects in our films. Filmmakers are hiding behind romance, ghost stories, murder

mysteries and sex. No film is looking at social issues. Swades and Lakshya were made. They flopped. We suffer from a lack of history and sanskar. When Lakshya, which I wrote,

flopped I felt the time wasn't right for me to write screenplays right now. How can better socially relevant films be made if they don't get the audiences' support? But, I intend to return to

How do people like you intend to stop the desecration of aesthetics in Hindi cinema?

I'm not pessimistic about the future. I feel things are changing. If you listen to the film songs between 1985 and 1995 they were in extremely bad taste. I'd say comparatively things are better

now. Gradually, people feel the need for an improvement in lyrics and melodies. There's a resistance to mediocrity. It may take another 5-6 years. But we're moving towards a renaissance.

Your closing thoughts on the quality of lyrics today?

How I miss the masters! Today, only Lata Mangeshkar remains. There's no singer in this universe who can intone words the way she can. Even if you don't know the meaning of a word, you know by her

expression. That's what a lyricist craves for.