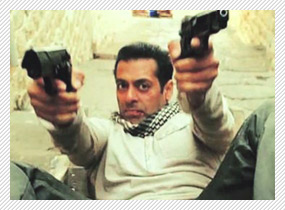 Babu Tyagi's warehouse in Goregaon West, Mumbai, is a three-storey building stacked with grey plastic cases and watchmen posted on every level. The door to the room on the top floor opens, and five men walk in. They begin to pull apart the grey cases to reveal seductive, shiny Sig Sauers, Mausers, Colts, AK 47s, sniper rifles and a rocket launcher. Tyagi's men pass them on until they find the perfect weapon, a Berretta 92fs, and load it with a 19mm parabellum round. The target is chosen and aim is taken. Boom. The sound is deafening and leaves everyone in the room holding their ears. The target, however, is intact. And the golden dummy bullet, with its green seal busted, can be spotted on the floor. The gun, having been thus checked, is packed away to be taken to the sets of Dabangg 2.


An old hand in supplying weapons and pyrotechnics for Bollywood films, Babu's key business is renting out dummy guns for film shoots. "We mostly deal with action directors who provide us with a list of weapons and equipment that they require for a film," explains the 36-year-old, who also rents out swords, knives and bombs (similar to the one that was found in Mumbai's Andheri West earlier this month and was mistaken for a real explosive).


With a slew of action films in production across Bollywood and regional cinema, the business of dummy weapons is on a roll. The Indian film industry relies on three key suppliers - Babu, his mentor Rajendra Tyagi (also operates out of Goregaon West) and Mumbai's Lokhandwala-based Mehboob Ghulam. But there are other small-time dealers who stock a smaller variety and cater to films down South and TV shows.

Babu clarifies that these weapons are fake, although each piece requires a license and can be handled off-screen only by registered members of Movies Action Dummy Effect Association. "Our association has close to 700 members. Every time we send equipment out to a set, a registered member has to accompany it with a license copy, and bring it back by the end of the day," he explains. The rule also applies to shoots outside. "A staff member travelled ahead with documents to Mauritius for the shoot of Saif Ali Khan's Go Goa Gone after custom clearance," says Babu.


Rifles for constables are the most commonly hired guns, after pistols. With terrorists being the new Bollywood baddies, snipers and AK 47s are now gaining popularity. The older models, in brass and wood, are meant for period films. The rental begins at Rs 250 a day for a pistol and goes up to Rs 2,000 for 'heavy equipment'. And each round fired costs Rs 150. Most of these men also deal with other must-haves such as cables and harnesses, apart from staging explosions with petrol or kerosene.


The use of dummies in films is recent, points out Rajendra. Use of slick weapons dates back to the '70s, before which rifles were popular for period films. "The guns in Sholay were real that fired blanks," explains Rajendra, who provided guns and other action sequence paraphernalia for Ishaqzaade and Ek Tha Tiger recently. "This was followed by handmade guns with an electrical circuit that would trigger a tiny chemical blast," he recounts. The globalization in the '90s, however, changed that and the import of sophisticated dummies started.

A pistol of Italian make can be purchased for Rs 25,000, often available with official dealers. Rajendra and Babu also keep an eye on foreign crews shooting in India. For a price, the foreigners surrender the guns at government's firearms registration division. Harmless otherwise, accidents with fakes are not unheard of. Gujarati actor Feroz Irani died in 1998 when he pulled the trigger on his forehead. Legend has it that Dharmendra was lucky when he realized that a real bullet had slipped in with the dummies in his hand.


To be hauled in by cops for questioning is part of regular work for these men. Ghulam had to visit the police station with the original license when one of his men was detained for questioning after being spotted with a machine gun. "That was in 2008, soon after the 26/11 attacks," recollects Ghulam.