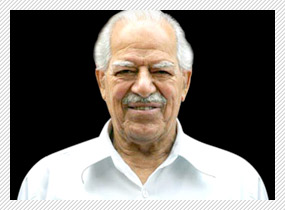 In the wrestling ring, Dara Singh never lost a single battle - in India or abroad. But though there is one battle every human being must lose - the battle with death - Dara Singh was a super-human even here. He went down fighting at 83 on July 12, meeting death at his terms and conditions. He wanted to spend his last hours at home rather than in hospital, and did so. He died with a smile on his face and back home in Dharmuchak village in Punjab where he was born, a woman who gave birth to a young baby the previous day christened him Dara on hearing the news of his demise! Even for his last (forthcoming) film, Ata Pata Lapataa, when he was too infirm to go and dub his lines at a studio, the producers brought the equipment to his home. There was no question of any other voice suiting his lips!

Everything about Dara Singh was of super-heroic proportions. As a wrestler of over 500 professional bouts, he ended his bout with Australian challenger King Kong in less than 15 minutes, defeating the champion in the '50s by even throwing him from the wrestling ring in a small village near Delhi. When he turned actor in the '60s, he did over 125 films as leading man and later character artiste, forming a 16-film team with Mumtaz, as Hindi cinema's third-most repeated pair after Dharmendra-Hema Malini and Raj Kapoor-Nargis! He shot double and triple shifts as actor, often doing stunts and action throughout the day. He would charge four lakh per film, which in today's times is equivalent to at least a crore! Truly, he was a one-crore colossus!

Later, Singh produced and directed films, acted in television serials, and did a good number of ads, including his recent campaign for eggs. In 1978, he started Dara Studios, a pioneering mini-film city in Mohali in Punjab. In 1989, he published his autobiography "Meri Atmakatha" written in Punjabi and he was nominated to the Rajya Sabha in 2003. For Deedar Singh Randhawa, a Jat son born to simple village folk Surat Singh and mother Balwant Kaur on November 19, 1928, this was nothing but about living life king-size and being a real-life superman.

With his corporeal exit, the word "living" has been disbanded from the term "legend" that will live on forever. If an Indian Thesaurus is ever compiled, Dara Singh will always be one of the 'meanings' for ultimate physical strength. When Manmohan Desai cast him as Amitabh Bachchan's father in Mard, he stated that the only actor who could have fitted the role of a mard's father was Singh, who was a "super-mard" in real life. A well-known hosiery brand's tag-line in its promotional campaign was "Mazboot itni Dara Singh jitni" (as tough as Dara Singh). And we all know how remarks like "Tujhe kya lagtaa hai, tu Dara Singh hai kya?" (Do you think you are (as strong as) Dara Singh are in common usage in all its variants in every Indian language!

Of course, for his chosen sport, Singh was the ultimate benchmark and role-model and the glamour quotient following his super-success inspired hundreds of young men to take to the sport and thousands more to strive for physical fitness in general.

Dara Singh worked briefly in a factory before getting his break as a professional wrestler in the only bout he did not win - it ended in a draw and was against an Italian. Winning championships in India and abroad became a habit - quite a progress for someone who started wrestling in public in village melas!

The Indian Wrestling Championship in 1953 and the Commonwealth Wrestling Championship trophy in 1959 by defeating Canadian champion George Godianko were among his biggest achievements. And before he retired from active wrestling in 1983 - his first professional bout was in 1947 - he had won titles like Rustam-E-Punjab (1966) and Rustam-E-Hind (1978) and other international honours. Till the end, Singh was extremely disciplined about his lifestyle, his rigorous exercises and his diet.

The actor who learnt on the job

For someone considered just a hulk with a yen for action, Dara Singh slowly grew as an actor. A chance offer to do his first lead role after a few cameos in King Kong (1962), piquantly titled after the man he had defeated, saw him demand and get a high price for a B-grade film, but his Punjabi accent was so strong that even in those days, his voice had to be dubbed.

The determined Dara began taking voice classes and finally made his Hindi good enough to be heard by a pan-Indian viewership. For someone whose films were considered B-grade flicks, he saw amazing success with many of his movies thronging dozens of movie-halls (albeit the humbler ones known for screening such films) in Mumbai at one time. In Faulad (1963), he "launched" Mumtaz as his heroine - the girl who was to become the topmost heroine of Hindi cinema alongside Hema Malini from the late '60s.

Very few know that it was Dara Singh who convinced Prithviraj Kapoor to take on his stunt film Lootera after a hiatus following his tour de force as Emperor Akbar in Mughal-E-Azam and start his last phase as a character artiste in the mid-'60s. Kapoor did several films of the actor including Singh's successful debut as producer-director, Nanak Dukhiya Sab Sansar (1970) in Punjabi.

His biggest hits as leading man also included the self-titled Dara Singh, Rustom-E-Hind, Sultana Daku, Samson, Hercules and Boxer. He was the natural choice for mythological 'toughies' like Lord Hanuman and Bhim in films and television serials as well as for mythical and fictional roles like Hercules and Tarzan. Singh graduated with age to character roles, doing everything from comedy (Prem Deewane, Kya Hoga Nimmo Ka, Jab We Met) to serious emotional roles in films like Anand and Sharaarat.

Clearly, the muscle in Dara Singh's body of work across all fields was even more than that on his iron physique.