The evergreen couple of Beta, Madhuri Dixit and Anil Kapoor, are reuniting after almost 26 years in Total Dhamaal. Ever since the news broke of their reunion, the fans are super pumped to see their late 80s and 80s couple reunite on big screen. As the shooting has begun, the first look of Anil and Madhuri is truly mesmerizing. 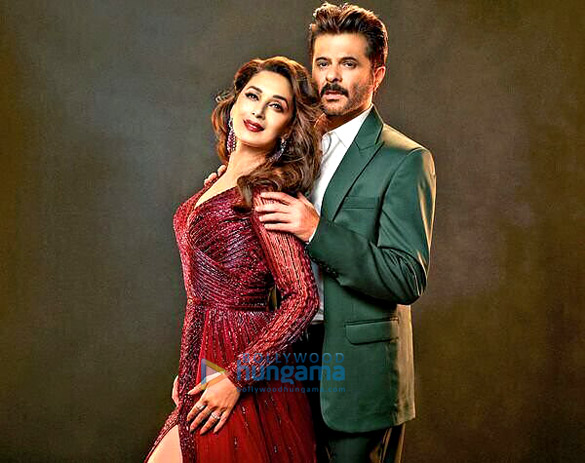 Madhuri Dixit and Anil Kapoor, who have aged like a fine wine, look as young and sultry in their first look in Total Dhaamal. The actress looks absolutely stunning in her full glam avatar dressed in a red sequined gown with beach waves and dark lips. She is posing alongside Anil Kapoor who is looking as dapper as ever. Together, they make a perfect pair.

Just recently, Anil Kapoor had shared a picture from their photoshoot with Madhuri Dixit and Indra Kumar on April 14. He captioned the photo, “How I love the first day of shoot! #TotalDhamaal begins today! @madhuridixitnene #IndraKumar & I are working together after 26 years but the energy and vibe is the same as it was during #Beta! It’s going to be an epic ride! Let’s get the camera rolling! ‪#ADFflims @foxstarhindi."

Anil Kapoor and Madhuri Dixit were one of the most favourite pairs. They starred in several films including Pukar, Kishen Kanhaiya, Tezaab, Beta, Ram Lakhan, Khel and more.

Total Dhamaal also stars Ajay Devgn, Boman Irani and Arshad Warsi. It is co-produced by Ajay Devgn and Fox Star Studios. The third installment in the franchise will release on December 7, 2018.

Madhuri Dixit, on the other hand, will be seen in Dharma Productions' next Kalank alongside Sanjay Dutt, Alia Bhatt, Varun Dhawan, Sonakshi Sinha and Aditya Roy Kapur.

Also Read: WHOA! Anil Kapoor looks dapper in his new Total Dhamaal avatar but refrains to look into the mirror