Taimur Ali Khan is our everyday dose of sunshine and has become our reason to cheer up and live our otherwise drab lives. So, the junior Pataudi has been chilling with his mom and dad in London and is his usually awesome self, in fact the British weather agrees with him a lot and these pics are a proof. So we all know that his favourite spot back home was his swing in Saif-Kareena’s Bandra apartment. Now it seems he has grown out of it and has found a new plaything. He was spotted riding a tricycle as his doting mommy walked with him in a park. Taimur is growing up fast and just like his parents, we want to preserve these adorable moments. 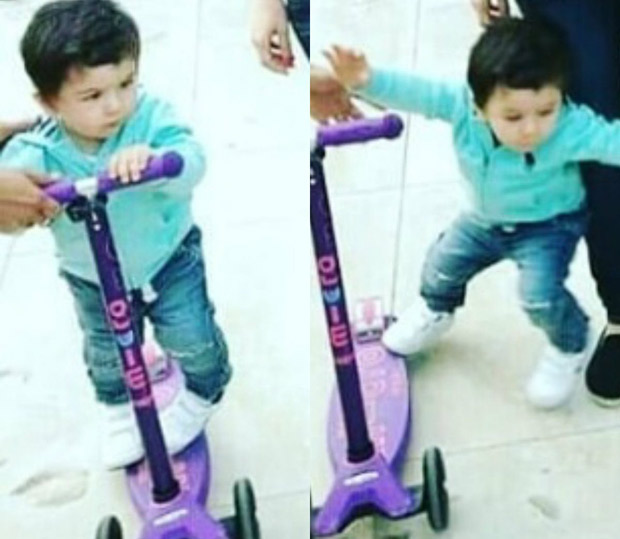 While Taimur is vacationing in London, his cousin Inaaya Naumi Kemmu was seen playing with his swing back home. By the looks of it, Taimur is a total outdoor kid and as mentioned by his parents on a couple of occasions he loves to run around and explore his surroundings. His indulgent dad also said that he is an observant kid and imitates them doing yoga by making loud, funny noises! So cute! He is pretty receptive towards people and paparazzi in general and that is also a source of concern for both Saif and Kareena. Saif has resumed his work and Kareena will now take a break to raise their baby. She will start shooting for Karan Johar’s movie starring Akshay Kumar by the end of this year. They have together decided that Bebo will do one film a year as she wants to prioritize her time for Taimur now.

Kareena’s last film was Veere Di Wedding which made a great business at the box office. With this, she broke stereotypes and proved that despite being married and having a child a mainstream Bollywood actress can do professionally well. We are glad that she is setting a right example for her contemporaries to follow.

Also Read: PHOTOS: Saif Ali Khan and Kareena Kapoor Khan look SMITTEN by each other in this commercial shoot