In one of the most devastating news, the nation lost their beloved leader Sushma Swaraj on August 6. The minister suffered cardiac arrest and was taken to AIIMS, New Delhi. The former external affairs minister and senior BJP leader was 67. A glorious chapter in Indian politics comes to an end. India grieves the demise of a remarkable leader who devoted her life to public service and bettering lives of the poor. "Sushma Swaraj ji was one of her kind, who was a source of inspiration for crores of people," Prime Minister Narendra Modi said in a series of tweets. 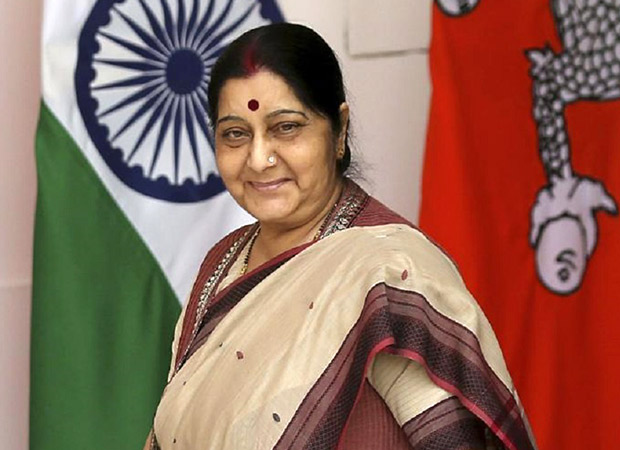 Bollywood celebrities took to their social media to pay respects to Sushma Swaraj who was not only a beloved politician but also an inspiration to many. She went beyond politics to help many in need and thus, became one of the finest leaders this country had ever seen.

It's with a heavy heart that we bid goodbye to the fierce leader and exceptional human being that was @SushmaSwaraj ji. Her loss will be felt deeply by the whole nation as we keep the memory of her leadership & wisdom alive in our hearts...RIP Iron Lady ????

It is to her immense credit that, during her term as the EAM, Sushma ji changed the stereotype of what we perceived a ‘minister’.

Firm in ideology, accepting of other pov wt due grace, a humane attitude to assist citizens anywhere n a capacity to make visibly quick decisions????????????????

Horrible news to wake up to.... deepest condolences to all the loved ones of @SushmaSwaraj ji. You made our nation look taller, walk with pride and aspire for nothing but the sky...what a remarkable, rich legacy. Prayers and thoughts with the family .... #RIPSushmaSwaraj

An Iron Lady who was not only a true patriot but an incredible inspiration for each and every one of us. An epitome of women empowerment and leadership.#SushmaSwaraj ji you will be missed and remembered forever. My deepest condolences and prayers to the family ????#RIPSushmaJi pic.twitter.com/OLrXJMuf0X

Deeply saddened...#SushmaSwaraj ji is and will always be remembered as one of the most respected and beloved leaders of our country. Her speeches in parliament, her empathy, her spirit, her kindness... what a remarkable and amazing human being. #RIPSushmaSwarajJi pic.twitter.com/kADsCOq6j8

Rest in peace @SushmaSwaraj ji. You were the most amazing parliamentarian and the minister and always there for your constituents . I will miss you and am sure we all will miss you .

A tall leader and a doer #sushmaswaraj .. never met her but feel saddened by her passing away .. an end of a chapter where Indians across the world felt there is someone looking after them .. #RIPSushmaswaraj .. Om Shanti ???????? pic.twitter.com/5IQiRh6DOj

Really shocking and sad news of the demise of Sushma Swaraj ji. A tall and dignified leader who commanded respect wherever she went. May her soul rest in peace. Sincere condolences to her family and millions of well wishers. Om Shanti. ????????????

A leader who worked tirelessly for the nation, a leader who set an example for millions, a leader who truly defined the meaning of a true Indian is no more but her ideology will stay forever. You will be missed mam @SushmaSwaraj #RIPSushmaJi ????

Saddened to hear about the sudden demise of Sushma Swaraj ji . May her soul rest in peace ????

India has lost its extraordinary leader, minister and personality.. May God bless her soul ???? #SushmaSwaraj

I had the good fortune of meeting #sushmaswaraj ji (Minister I&B) in 2001 when she visited #RamojiFilmCity where @geneliad & me were shooting for our debut film #TujheMeriKasam-she blessed us & wished us success, as newcomers it energised & encouraged us-ThkYou for your grace mam

RIP Sushma ji. Absolutely shocked and devastated to hear about her passing. She was always close to me and was extremely kind, since the early days. My heartfelt condolences to the family & our entire nation for this great loss.

#RestInPeaceSushmaSwaraj
This was so sudden, shocking.
Condolences.
????????

RIP #SushmaSwaraj ji. May her soul rest in peace

I hail from Ambala Cantt, same as Sushma Swaraj ji. Always felt proud that a woman from our small town made it big, and made a difference. Sushma ji rest in peace. You inspired me on a personal level. #RIPSushmaSwarajJi

My sincere condolences on passing away of #Sushmaswaraj ji. One of the finest leader of our country.She was special and we will miss her.Sending my prayers to family and friends. pic.twitter.com/BeYy6S9TmN

Deeply saddened that Sushma Swaraj has passed away.Inspite of political differences we had an extremely cordial relationship. I was 1 of her Navratans as she called us during her I and B ministership and she gave industry status to film. Articulate sharp and accessible. RIP

Deeply saddened by Sushma ji’s demise.The Music Fraternity will be indebted to her for magnificent defence of their rights in the Lok Sabha . You were an exceptional person Sushmaji. We will always remain thankful to you.

A force of nature she was. Too young to go. Saddened to hear this untimely news. A nation’s loss. #SushmaSwaraj #RIPSushmaSwaraj