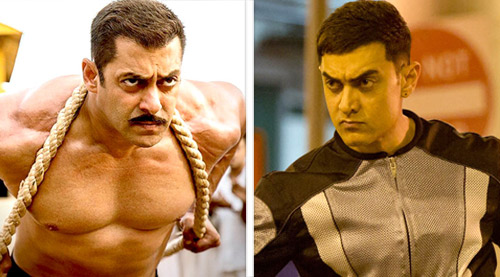 It has been well over three weeks since the Ali Abbas Zafar directed Salman Khan - Anushka Sharma starrer Sultan hit screens. The film which was one of the most highly anticipated, talked about and keenly awaited films of 2016, fast became one of the biggest money spinners of the year. While the film has gone on to break numerous records, there are a few, that still seem a bit elusive. In fact we take a look at one such record that seems likely to be broken in the near future, viz. will Sultan manage to surpass the previously released Aamir Khan starrer Dhoom 3 to emerge as the third highest worldwide grosser.

While the first slot is firmly held by Aamir Khan's PK that released in 2013 grossing approx. Rs. 769 cr, the second spot is claimed by the Kabir Khan directed Bajrangi Bhaijaan starring Salman Khan that grossed approx. Rs. 629 cr globally. Currently, in the third place is Dhoom 3 that had managed overall worldwide gross collections of Rs. 584.58 cr (Domestic 398.52 cr. + International 186.06 cr.). However, Sultan that has till date grossed Rs. 573 Cr (Domestic ? 416 cr. + International ? 157 cr.) seems to be closing the gap as days pass.

Considering the fact that Sultan is still running in cinemas albeit in considerably fewer shows, it is still raking in the moolah. If things continue as expected, Sultan might in all likelihood become the third highest worldwide grosser.