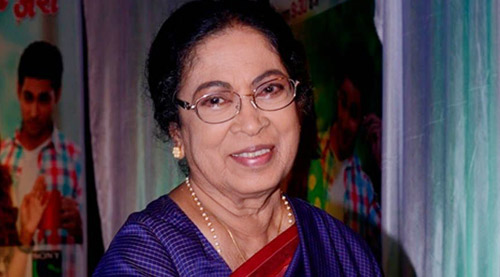 Amol Palekar: "In 1967, I made my debut in theatre with a Hindi play Chup, Court Chalu Hai. In 1968, I also made my entry on silver screen with a Marathi film Shantata, Court Chalu Ahe. The lead actor in both was Sulabha. I still remember being completely bowled over by her brilliant performance in Yayati in 1966 and getting an opportunity to rub shoulders with such a fine performer right in the beginning of one's career was a great privilege! Later, I also was privileged to act under her direction in Pratima, a play in verse. It was performed as the opening attraction of Chhabildas Theatre which went on to become a hallowed space in the Indian experimental theatre movement. I fondly recollect some beautiful moments while shooting Ramnagari, particularly a haunting bhajan duet composed by Jaidevji. The situation required Sulabha, who played my mother, to teach me a few things in singing and she did it with such finesse that it was like attending a master class. Sulabha's performances in Marathi as well as in Hindi theatre have been outstanding and her contribution to the experimental as well as children's theatre is stupendous. Unfortunately, the media tends to overlook those since it's considered and looked down upon as 'regional'.

Mahesh Manjrekar: "Though I was closely associated with her and a huge fan of her work I never worked with Sulabhaji! My loss entirely. For a person like me who is so closely associated with Marathi theatre and cinema she was more than a doyen. She was an institution. Together with her husband legendary actor Arvind Deshpande she gave to Marathi theatre and cinema some of the biggest talents including Nana Patekar. She was very nurturing very caring and generous. That spirit of imparting knowledge and nurturing talent is no more there in our culture. I last met her when she came to see one of my plays. Till the end her passion for acting remained unextinguished. Her love for theatre was unbelievable. Cinema was just the tip of her talent. Her real work and largest share of her dedication went to theatre."

Gauri Shinde: "She did one of her last films with me. Very very saddened. She was a beautiful phenomenon. Such natural talent and such a joy to work with and be around. Full of life and full of humour. Her jokes her one liners during the shooting of English Vinglish always had me in splits. She shall be missed sorely. You don't cross paths with people like this often and I was honored to have had the opportunity."

The staggering musical heritage of Basu…

"There was instant chemistry"- English…

Watch: This is how Saiee Manjrekar reacted…