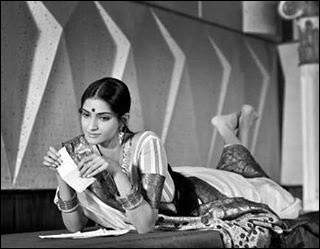 June 4 was the day when one of Bollywood's iconic actresses Nutan Samarth Bahl aka Nutan had taken birth. Even though she is no longer amidst us, the aura of her persona still continues to be around. How can one forget her heart-warming performances in films like Seema, Sujata, Bandini, Milan, Main Tulsi Tere Aangan Ki, Meri Jung etc…

As an ode to the legendary Nutan, Sonam Kapoor attempted the unimaginable. She, not only got dressed up as (the late) Nutan, but also struck the famous pose from the cult film Saraswatichandra, wherein Nutan was lying on a bed with a letter in her hand.

Sonam Kapoor posted the 'recreated' photograph on her Instagram account, with an apt caption that stated, "This was an ode to #nutan my favourite actress from the golden era of Indian cinema besides #Waheedaji .. It's her birth anniversary today and I just want to say I'm grateful for the legacy she left behind through her brilliant work, Bandhini, Saraswati Chandra, Milan, Sujata, meri Jung to name a few. You were the flag bearer for strong female roles... #flashback #nutan #hero #heroine".