Suhana Khan is up and about B-town before her ticket Bollywood. When she is not at her International University, studying acting she is here in the Bay catching up with the industry-wallahs and grooming herself for a Bollywood debut. Last night she was seen hanging out with Shweta Bachchan Nanda and her childhood friend Agastya Nanda. Shweta was at a book launch with dad Amitabh but she made time to catch up with her friends too! Cherry on the cake was that the kids joined in too. 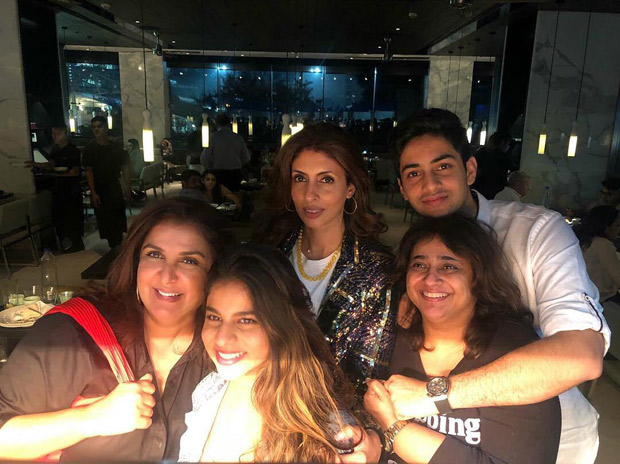 Stylish ladies Shweta and Suhana were accompanied by Farah Khan and Aarti Shetty. Suhana Khan was seen letting her hair down with her childhood friend as Shweta Bachchan Nanda caught up with Farah Khan who put up a post on Instagram thanking her friends Putlu and Shweta Bachchan Nanda for showing her a good time. For the uninitiated, Farah Khan was embroiled in a controversy after her brother Sajid Khan was named and shamed by various women  as a regular sex offender in the ongoing me too movement in the industry.

Farah had spoken about this and had stood by the victims she also wrote in the exception she wrote in the caption about this and thanked her friends for being there in her difficult time. This is not the first time that Suhana has been seen with Shweta Bachchan Nanda; the girls have a lot common. Suhana was present at Shweta's store launch a couple of months ago and bonded well with Navya Naveli Nanda Shanaya Kapoor and Ananya Panday.

It is only time that Suhana's debut film will be announced. She has already made her first mark in the industry by appearing as a cover girl on the prestigious Vogue magazine. Daddy Shah Rukh Khan unveiled the cover and wished her all the luck for her future journey in films and more. This pic of Suhana chilling with Bollywood veterans is making us excited for her debut, also special mention to the fact that agastya is looking dapper by the day …. will we see him soon on the big screen too?

Good friends make the good times better and the hard times easier.. thank u @putlu @shwetabachchan for a lovely evening.. n the beautiful babies for putting up with us♥️