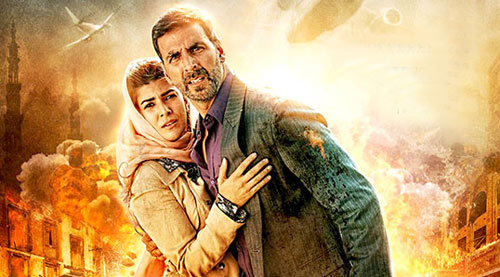 For my money and time, Akshay Kumar is the most watchable star in Bollywood today. See Airlift. You will know why. Unlike the other superstars his growth is constant.

Every film-and I include his steady stream of comedy films-finds him touch base with new depths of emotions within himself.


In Airlift, to play Ranjit Katyal, the unsung unknown hero who masterminded the evacuation of thousands of Indians stranded in Kuwait in August 1990 when Saddam Hussain's battle-drunk army

decided to take over, Akshay delivers a performance that is subtle and skilled. He weaves his way around the crisis, looking for center to his war-torn conscience-stricken character. When he finds

that center, the actor builds a character who uses his negotiating skills as an entrepreneur to rescue innumerable lives from danger.


It's a role clearly inspired by Liam Neeson in Steven Spielberg's Schindler's List. And Akshay is every bit as compelling as Neeson, if not more.


After a look-what-an-affluent-couple-we-are party song (totally unnecessary) the plot straightway takes us thick into the tensions on the war-torn streets of Kuwait. The images of a suddenly-

violated landscape are imaginatively mapped. It comes as surprise that the film is shot by female cinematographer Priya Seth. The images her camera captures are rugged virile and predominantly


We see the ravaged city swathed in the fire of fear. And the fear tension and anxiety is most palpably manifested on Akshay Kumar's face. A handsome, happy face suddenly stricken with panic for his

when Ranjit's faithful driver is gunned down my Saddam's marauders. Soon, the immediate concerns merge into a larger concern for the safety of all the stranded Indians in Kuwait.


For Ranjit the solution to the crisis is non-negotiable: either the safety of all Indians, or none. As his wife, at first skeptical about her husband's sudden conscientiousness and then totally

supportive, wonders: where did that come from?! The sense of an individual rising to confront a mammoth crisis is placed at a predominant position in the plot. The scriptwriters Suresh Nair, Rahul

Nangia, Ritesh Shah and director Menon, have researched Saddam's invasion well. But they don't allow the narrative to be bogged down by the politics of history.


Airlift is first and foremost a heart-stopping thriller. It's the story of a man whose heroism is awakened in the hour of crisis. It's an untold story that needed to be told some of the most


Actor Kumud Mishra, never known to let down his characters, creates tremendous empathy for the role of a bureaucrat struggling to convince an apathetic Indian administration to send help for the

stranded Indians in Kuwait. During times of a crisis the humanism of an otherwise-self-centered civilization is known to surface effortlessly. Airlift takes us through that journey of the

Kuwait-stuck Ranjit Katyal's desperate telephonic conversations with bureaucrat Sanjeev Kohli show both the men striving to tackle a crisis much larger than within their capacity to tackle it. It's

a majestically balanced equation brought to a fulfilling culmination by the subtlety and charm the two actors bring to their roles.


There is a lovely little scene in Sanjeev Kohli's tiny home where his father (Arun Bali) a Partition refugee, reminds his son what the loss of homeland means to an individual. Here, the evacuation

of Indians from Kuwait effortlessly acquires a beautiful historical perspective.


The fringe roles of the scared frightened evacuees are played by competent actors, though some of them over-do the anxiety act. Standing-out among the crowds of refugees is Prakash Belawadi as a

cantankerous whining old man, the kind of nuisance maker one comes across during any time of crisis. Belawadi's farewell hug for Ranjit Katyal is the kind of reluctant salute that makes the hero


Nimrat Kaur as the hero's wife doesn't have enough space to take her character very far. She has one important outburst sequence where she ticks off Belawadi for questioning and insulting her

husband's heroism. Purab Kohli is engaging as a man searching for his missing wife in the mayhem that Saddam created, redeeming his loss by saving a helpless young Kuwaiti woman from sure death.

It's yet another part given a lot of heart by the writing and the actor playing the role.


Though Akshay Kumar and to a much smaller but equally significant extent, Kumud Mishra tower over the plot, the smaller characters are all etched in vivid shades. Except for a ridiculous 'Arabic'

accent sported by an Iraqi general (played by Inaam-ul-Haq) the film doesn't strike one false note as it hurls through events that history buried in a place too deep for tears. Though the budget

clutches us by our guts. More importantly Airlift shows, with resolute authority and underplayed virility, how a hero is a product of the troubled that humanity inherits from its own


Ranjit Katyal is the 'Bahubali' of his crisis.


Sometimes, being human comes naturally to cinema. That's the moment we need to salute celebrate and sanctify so that we get to see more unsung heroes on screen. We didn't know Ranjit Katyal. But

now Akshay Kumar has brought this unclaimed hero out of the rubble of history.


It takes one hero to recognize and acknowledge another.