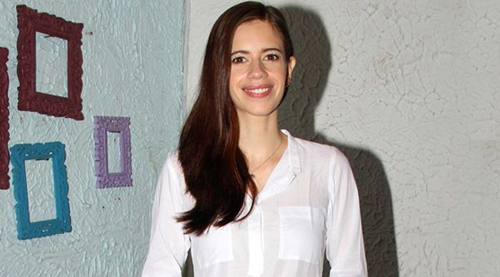 feisty actress in an aggressive avatar, deriding the role of the media in sensationalizing news about women. Over

the years Kalki has been identified with issues related to women's empowerment that she raises in her cinema, in

videos and on public platforms. A chat with the spirited activist-actress.

What brought on The Printing Machine, please tell me about its genesis?

I was just disturbed by headlines and wanted to write how we become de-sensitized to shocking news. It was

The excesses of the media have been excessively covered. Then why your angry outburst?

Admittedly, there is a mix of truth and anger in your diatribe. Is that what you aimed to project?

I aim to make us aware of our habits and trappings as a society to be apathetic.

How did the rapid flow of words happen?

Just kept hitting headlines or thoughts down, over a couple of months and then when I got the sound of the

printing machine takakataka that's when I turned it into a poem

The rapper in you wraps herself around the words fiercely, angrily... how tough was it for you to put those

words across in a coherent flow of furious irony?

I think I enjoy the process of putting words to rhyme and rhythm; it's the performer in me.

Must ask you, does the medialization of human lives have any redeeming quality for you? If Nirbhaya was not

highlighted to a hammering high, we would have never made rape such an issue for discussion? Do you agree?

Oh absolutely. The idea is not that shocking journalism should be censored but that it should be followed through

and not given in snippets without context, and that our recent past should not be forgotten quickly.

Is the Printing Machine a precursor to other indictments of societal excesses to come from you?

I don't know. I write a lot of things down, and sometimes they just come together, hopefully I will.

Please tell me about your forthcoming films?

drama about how we fit into life, what part we play. It's waiting for release in March. Jia Aur Jia with

Richa Chadha and me, is also finally set to release this year.